Present:
Michel Nandan – Hyundai Shell Mobis World Rally Team
Malcolm Wilson – M-Sport Ford World Rally Team
Pierre Budar – Citroën Total Abu Dhabi World Rally Team
Tommi Mäkinen – Toyota Gazoo Racing World Rally Team
1st Ott Tänak – Toyota Gazoo Racing World Rally Team
2nd Jari-Matti Latvala – Toyota Gazoo Racing World Rally Team
3rd Hayden Paddon – Hyundai Shell Mobis World Rally Team
Q:
Tommi, we have a Toyota 1-2 at the end of the day. Can you actually believe that we
have seen out there today?
TM:
Of course, it was not looking so good yesterday. We expected to find very
challenging conditions but we have had so many dramas today. I don’t think we have
ever seen anything like this before. Hot temperatures, hard for the drivers and very
technical stages and easy to make small mistakes.
Q:
Ott is in the lead now and that opens the door for the title and you have two Toyotas
in the top two now. We are guessing team orders are going to come into play?
TM:
I’m not sure that I need to say anything about that. I am sure our drivers have seen
already the situation and they know what to do. They are not going to fight together, I
guess! If I noticed something happening tomorrow morning it wouold make me
nervous.
Q:
Michel, what a dramatic morning. Let’s start with Thierry Neuvlle who was leading the
rally going into this morning, Big dramas as we watched that top mount come through
the bonnet. Big disappointment for him in Turkey?
MN:
Yes, of course, it was because it was not his fault. In fact, he lost the spring,
everything, and they did a very good job and they really tried hard. It was very difficult
to fix it.
Q:
Then Andreas Mikkelsen lost the lead. He seemed very frustrated. What actually
happened there?
MN:
For sure, I can understand. He was in the lead and doing a very good rally. The drive
shaft broke and, you know how it is, it is quite difficult to drive like that.

Q:
But Hayden Paddon is in third position. Is it a case of getting through the 34km
tomorrow please Hayden?
MN:
Yes, of course. He knew this was the strategy from the beginning of the rally to avoid
mistakes and be careful on the rough. What he did so far, he did very well. Now he is
in a good position for us.
Q:
Malcolm, this seems to have been a pivotel rally in terms of the championship title.
First it was Neuville who had problems and then it was Seb. It was the highs and
lows of rally in the space of a couple of hours?
MW:
It has been an incredible day. First of all, Seb did a great job to change the parts on
the car and then to go and do the time he did was fantastic. Then we came back into
service here. There was a lot of work to do on the car to the point where Elfyn had to
do his own repairs. The pace he was going at, he was always passed Jari and Ott
and he may well have been back in the lead. Sadly that was not to be the case today.
Hes feeling pretty low at the moment.
Q:
What does that mean for the championship battle now Malcolm?
MW:
I think we need to get tomorrow out of the way first if you see what has happened on
the first two days. But, there is no question that if Ott wins it will be very difficult. For
sure, we will not give up and will keep on fighting right until it is possible or not.
Q:
Elfyn has been a real team player out there today. Definitely the team person of the
day?
MW:
Yes, without question. It’s great when you have got someone like Elfyn. He has been
working on cars all his life and has been with this car since we started the testing. He
knows the car probably as good as any of the engineers. He knows what to do.
Q:
Pierre, a difficult day for the team. You lost two cars out there today. Let’s talk about
Craig Breen. There was smoke in the car and then he started to work on the car after
the stage finished and it caught alight and was completely destroyed. What
happened?
PB:
I am learning a lot this year. I did not think that so many events (could happen). The
problem is it is difficult to do any analysis. So I will not say anything on this because
we do not know really. They managed to have no smoke in the car and the
temperature was going down and then, suddenly, they had a fire. It’s not clear.
Q:

Mads left us this morning. What can you tell us about this?
PB:
We had an issue with the turbo with Mads this morning. This was quite similar to the
one we had yesterday with Khalid (Al-Qassimi). We are in the same situation for
both. We don’t understand because we did not face this problem before since many
years. Mads will be back tomorrow.
Q:
Ott, what a day. You lead by 13 seconds after another challenging day. Did you
believe that you could be in the lead at the end of the day?
OT:
I believe I didn’t believe anything. We have seen what the conditions have been like.
Its been so tricky and very demanding. Today was less rough than yesterday but the
roads were demanding with a slippery surface. We knew from the beginning that this
is not the event where the fastest guy is winning. I am not the fastest guy but we are
here and we are happy. The target was to make it through with no stops in the
stages. There are still some jobs to do.
Q:
How do you feel as a driver when you see so much drama around you? Does it make
you want to ease off a little bit?
OT:
I have not been looking too much. We have had our own issues and I have been
focusing on that. I tried to keep it going. Now we have a reasonable rhythm and we
are doing our job and that’s how it is.
I know that if it goes like this tomorrow a lot of things might change. Our approach for
the moment will be the same for tomorrow to bring the car home. It’s the same for the
team. We need the points for the Manufacturers’ Championship. It’s important for
both of us that we finish tomorrow.
Q:
Jari-Matti, we asked about team orders. What are your thoughts?
JML:
I must say it is a long time since I had a chance of winning. In Sweden last year, so
the passion is there to go for the win. Now we are in a different situation. I have not
had a good season and am quite far behind in the points. From a personal side I
cannot gain anything. Ott is in a very good position for the championship on a
personal level because Seb and Thierry are out. If he can score maximum points he
will be fighting for the title. We also need these points to get closer to Hyundai.
Q:
As you are staying with Toyota next year, you want to be a bit of a team player dont
you?
JML:
That is the game you know. In the past, with Ford, we were always supporting each
other.

Q:
Are you admitting you are staying with Toyota next year then?
JML:
The chances are higher….
Q:
Hayden, we did not see tou in Germany and we find you on the podium here at the
moment. Are you happy?
HP:
Yes. Its good for us but not so for the team. We had two drivers in contention for the
win. Those points have maybe gone missing and it’s important for us to bring home
this result for the team. I have tried to learn from my mistakes. Some times in the
past we have gone out too fast on these rougher rallies and been on the side of the
road. Our goal has been to keep it neat and tidy. It’s not easy to do but we hve been
sticking to it so far.
Q:
Only 34km left tomorrow and there is quite a big gap between you and Jari-Matti and
the car behind you. You don’t want to risk anything tomorrow do you?
HP:
Not in our position. 34km and one minute, not in our position. We want to be clever
tomorrow and bring home this result.
Q:
Do you think this will help with the decision-making about where you are going to be
next year?
HP:
It’s much too early for that. At the moment this rally is a completely different kettle of
fish to anything else. This is not about speed. It’s about trying to look after the car. I
think it’s irrelevant. 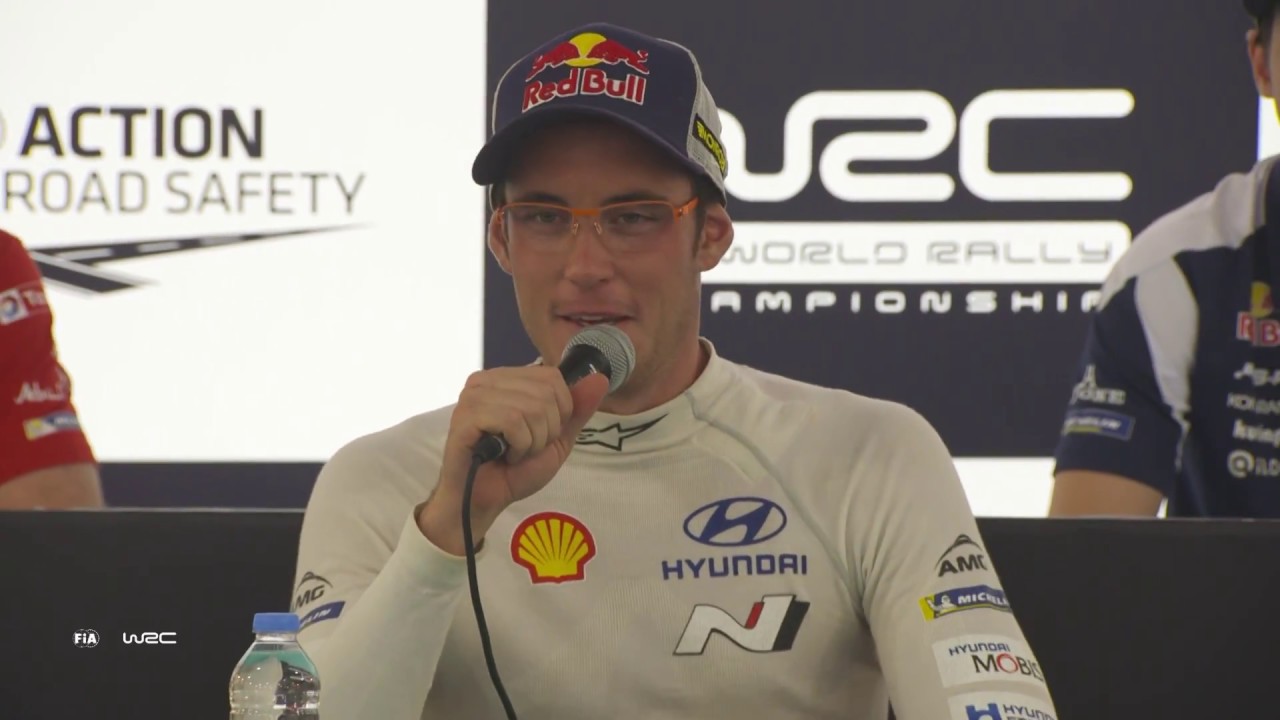