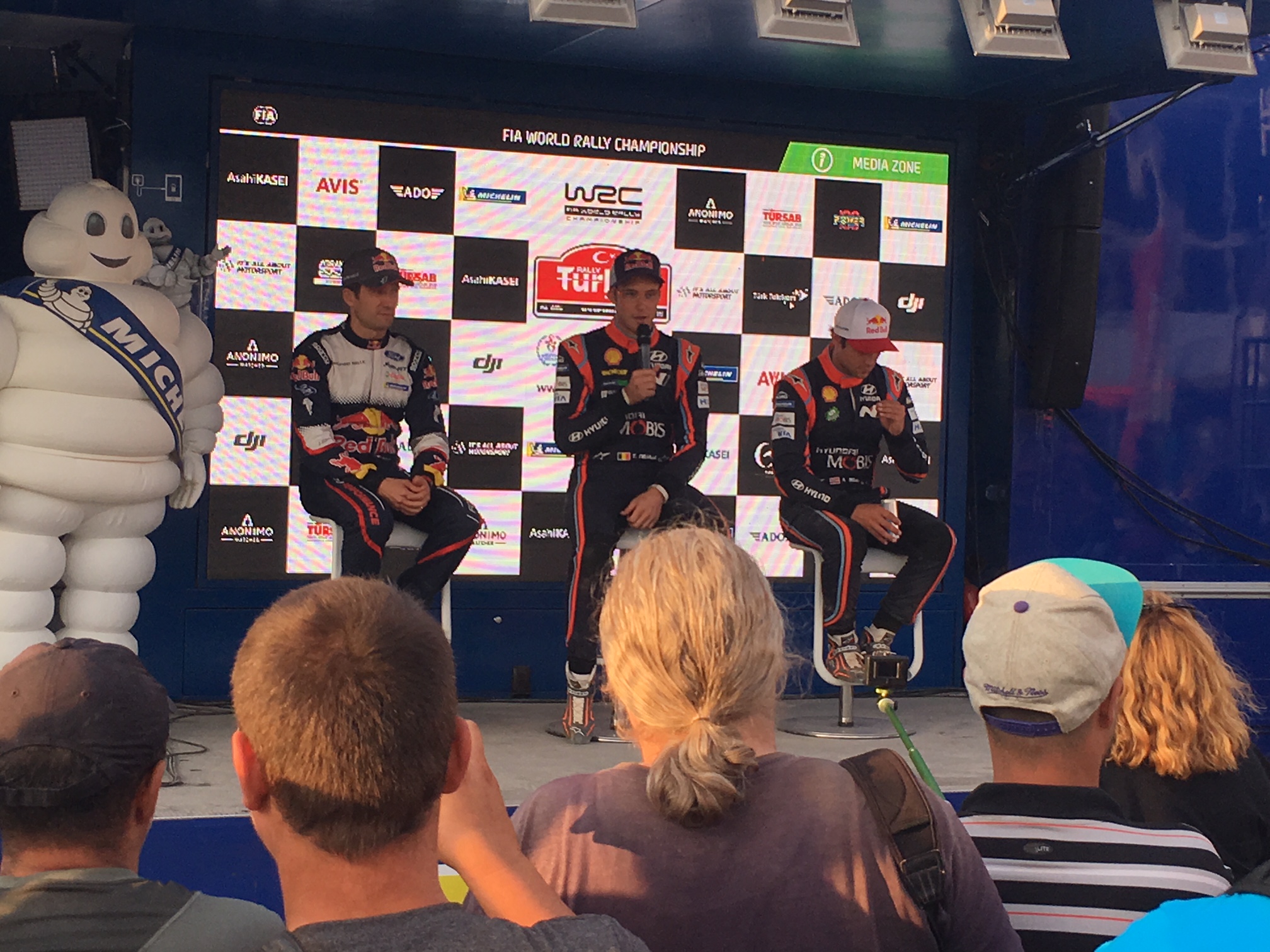 Present:
Michel Nandan – Hyundai Shell Mobis World Rally Team
Malcolm Wilson – M-Sport Ford World Rally Team
Pierre Budar – Citroën Total Abu Dhabi World Rally Team
Kai Lindström/Tommi Mäkinen – Toyota Gazoo Racing World Rally Team
1st Thierry Neuville – Hyundai Shell Mobis World Rally Team
2nd Sébastien Ogier – M-Sport Ford World Rally Team
3rd Andreas Mikkelsen – Hyundai Shell Mobis World Rally Team
Q:
Michel, we weren’t sure what to expect from this new event. It has proved very
challenging. Did you expect to be leading with our championship leader Thierry
Neuville running first on the road?
MN:
Not really. But it is also difficult because Seb is just three-tenths behind. We see
when you have this type of rally we did not expect to have small gaps like that
between first, second and third. Also, this is a day of finding the way to drive. In some
parts you have to be cautious but it is difficult to judge. It’s certainly not finished.
Q:
It’s been a strong day for the team today. Andreas Mikkelsen was leading for the
majority of the day. What have your thought of his performance today?
MN:
He drove very well. He had no real problems and only a puncture and that did not
affect him too much. He was also quite careful in some parts of the stages.
Q:
Thierry wants to win this event but, with that, comes the risk because Ogier is not too
far behind. How much are you prepared to risk?
MN:
That is a difficult question. I think a win is a win but, when you are in a position to win
the championship like Thierry, then we have to see.
Q:
Malcolm, we watched Seb this morning with interest. What happened this afternoon?
He came out of the service into the long stage and blew everyone away with his time.
MW:
Nobody got chance to speak to him. He was too busy with his computer going right
through the stage. He must have realised that there were a lot of places where he
could improve his performance this afternoon. He took full advantage of his lunch
break and did an incredible job on the toughest stage of the day.

Seb has to try and get more points from Thierry so I am really relying on Michel
(Nandan) to calm Thierry down so that we can get some extra points! I am sure he
will do it.
Q:
Teemu Suninen was second fastest and does not have that experience. What were
you thinking when you were watching those splits? Were you worried?
MW:
Yes I have to say I did think…’hmm, do I need to get the trailer ready!’. He did a good
job but he did pay the price by taking a lot out of his tyres for the next two stages. But
when you think about his level of experience, to be able to do that pace was quite
special and it looks good for the future.
Q:
Unfortunately it has been a dramatic day for Elfyn Evans. Problems this morning and
then he hit a rock and hasn’t returned to service. Disappointing for Elfyn today?
MW:
Yes it’s disappointing. He also had a spin on the first stage and lost time. Then we
had a rear differential problem. He managed to get the car back here. I didn’t think he
would and the guys did a great job. Then, this afternoon there was a rock on the line
and he could not avoid it. It broke the front-left suspension.
Q:
Pierre, starting with the positives, Craig Breen was leading the rally. What did you
think of that performance this morning? Unfortunately, the afternoon was not better
for him and we saw a very emotional Craig at the stage end. He was in tears
because he keeps having problems on Fridays…?
PB:
This morning it was quite good. He was confident in the car and there were no risks
because of the conditions. His time was good. We expected a better afternoon.
Maybe we can start the rallies on Friday at midday. Every Friday aftermoon, one after
the other, he seems to face some problem, punctures or something. He has to start
on a Saturday morning in a rough place.He’s not happy.
Q:
Mads was in a podium position this morning and then we saw him pulled over at the
side of the road this afternoon. What happened?
PB:
This afternoon, on the first stage, he had a delaminated tyre and a puncture. The
second stage, he hit a rock and broke the suspension.
Q:
Tommi, we’ve seen brilliant performances from Ott with wins in Finland and
Germany. It’s not over yet, but the pace has not quite been there today. What’s been
going on?
TM:
I would say it has been an interesting day. In the morning we could see that the
Citroëns were fast. Then, after the first service, the Hyundais were fast and then the

Fords were fast on the second stage. Them we were fast on the last stage. It has
been an absolutely brilliant day. Everyone has been performing and still we have two
days to go.
Q:
Jari-Matti has found pace and is not too far away. What can be do tomorrow?
TM:
He is only 16 seconds behind and that is not a lot at all. I think he can come back
very strong with his confidence.
Q:
Thierry, you really should not be leading at the end of the first day on a gravel rally?
TN:
Why not? I did not expect to be leading overnight, but I have to say we had avery
good day. I struggled a bit to find a good speed this morning. In some stages we
were cleaning. The first one was tough. Some guys at the back of the field were able
to go faster. We were able to react and this afternoon went quite okay. I was
surprised to see Ogier pushing so hard in these difficult conditions. We tried to react.
It’s a big fight and I really enjoyed that.
Q:
You won the middle stage on both occasions. Every driver seemed to be losing time
to you in the middle of that stage. What were you doing that was different?
TN:
I don’t know. Our car is working well in these conditions and I felt comfortable. I
decided to push as well. When you decide to go a bit slower, you lose a lot of time.
My tyres were not so bad. I was frustrated with myself on the last stage when I spun
the car. I was shouting at myself. But that is part of the game. When you are going at
that speed everyone can make mistakes.
Game on. That is nothing new. It has been like that since the start of the season.
Sometimes one is faster and then the other. Sometimes we are equal, but Andreas is
close behind and some other guys are waiting.
Q:
Sébastien, on the long stage this afternoon you blew everyone away. What changed
at service? Anything car-wise?
SO:
Not really I tried as hard as I could the whole day. The frustrating moment was losing
a lot of time in the dust on the first stage this morning. It was the same for everyone
except Thierry. At least it’s only one taking the benefit and it’s the one losing time
with the cleaning effect. I did not know why we were quicker. It was very rough and
broken. I did not push. If you push there you destroy everything. It was a good
surprirse to see my time. It is surprising to see Thierry and me first and second. It
does not normally happen on a gravel event, but the conditions today were not that
bad for the front-runners.
Q:
You both want to win and that means taking risks. How do you balance the risks?

SO:
This long stage this afternoon, you were fighting just to stay there. You were crossing
your finger while driving that everything just stays in one piece. You never know what
to expect in the next corner. I was glad that we finished those sections. The last two
stages were okay. Even if it is smoother you can have loose rocks and you need a bit
of luck that the car resists them. At least we have a better start position for tomorrow.
It will be a tough fight. But we will try.
Q:
Andreas, you have led for the majority of the rally. We have seen great pace from
you. Are you happy with what you have done so far?
AM:
Yes. It has been a good start to the rally by us. I was quite surprised this morning that
nobody else had the idea to go with some medium tyres. I was the only one and it
was working well. It was a litle bit on the limit but it was the correct choice. In the
afternoon it was really rough, probably the roughest stage I have ever done in my life.
Sadly, I had a puncture and lost a lot of time to these two guys. The last stage, I tried
to give my everything with the tyres that I had left. And they were not much to brag
about to be honest. Third place, but I am not far off. I can risk a little bit more.
I will do my best tomorrow. It is not important for me for the championship. That has
already gone now. I really enjoyed the stages and I think tomorrow will be better than
today. You need a level of luck on this rally.
Q:
What have you thought of your Turkish experience?
AM:
It has been great with a fantastic atmosphere. There are some very rough stages, for
sure, and maybe on the limit in some places. If you have a WRC car, it’s on the limit
to okay. If you are coming with a WRC 2 or a Junior, it must be a nightmare, so I am
very glad I am in the car that I am this weekend. It’s been the toughest day in the
championship. 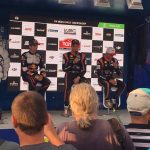