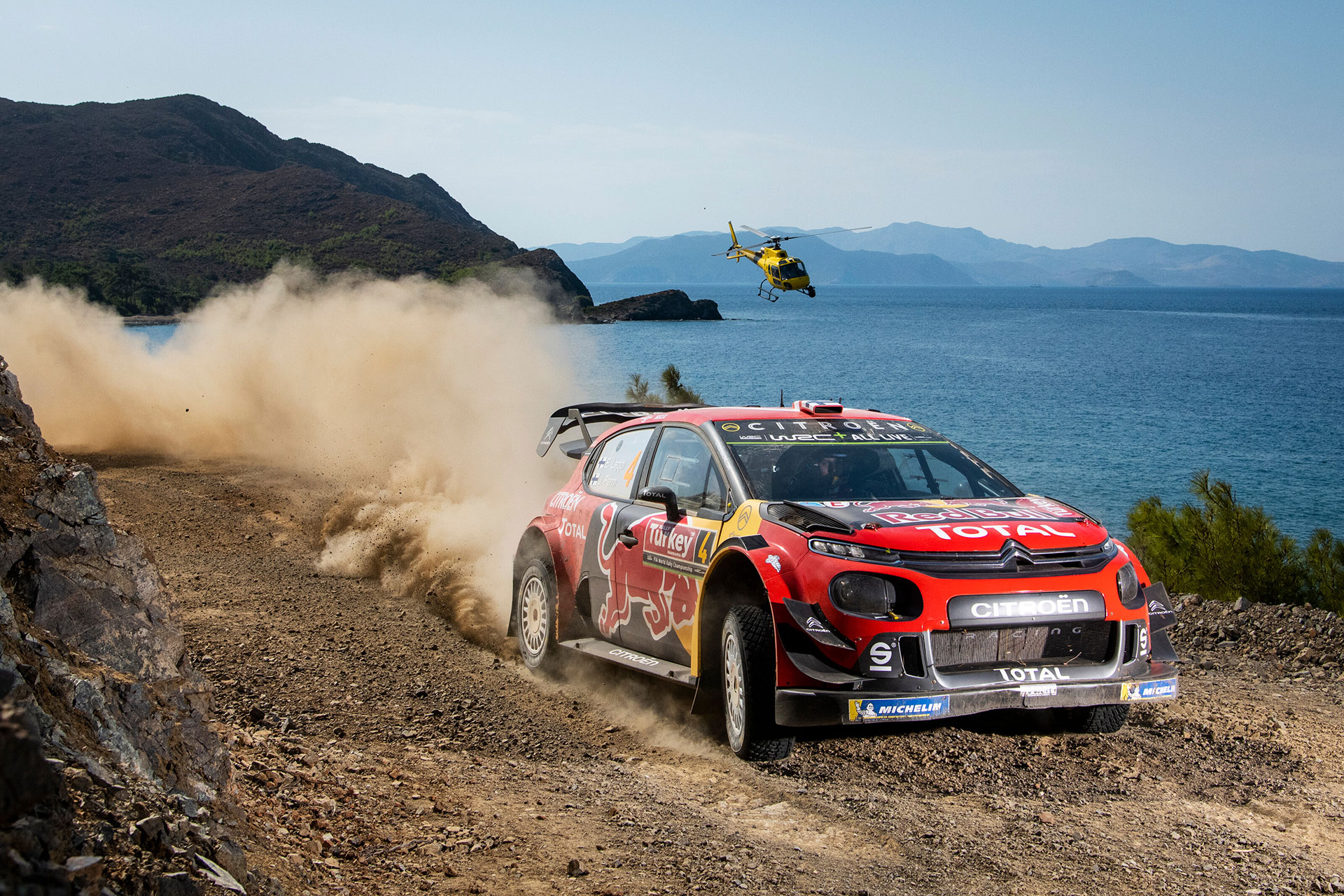 MARMARIS (TURKEY): Citroën Total World Rally Team’s Sébastien Ogier and Esapekka Lappi were the class of the field on the third day of Rally Turkey and managed their pace to preserve their tyres and secure a comfortable first and second in the overall standings after 13 special stages.

Lappi started the day with a 17.7-second advantage over the six-time World Champion, but the Frenchman pulled off a brave and canny tyre choice for the longer stage at the start of the morning and the duo then became embroiled in a fascinating tussle until Ogier grabbed the lead in SS12 when Lappi stalled under braking for a downhill hairpin.

Ogier takes a lead of just 0.2 seconds into the night halt, although team orders would have come into play in any case on Sunday to ensure the Frenchman stays on course for a 47th career WRC win and a first since Mexico in early March.

The Frenchman said: “It has been a very good day. We had no trouble, quite a good rhythm and our rivals had trouble. Now we have to finish the job tomorrow. Quite a big difference in the car compared to three weeks ago and we came here with a good feeling after we had a good test on gravel.”

Lappi added: “I don’t mind if we are not leading. I would like to be there, but I made a small mistake. Even if I was leading tomorrow, the points are important to Seb and we would back him up. It has been a good weekend so far. Fingers crossed we can make it.”

Hyundai Shell Mobis World Rally Team’s Andreas Mikkelsen delivered impressive stage times throughout the day and conserved his tyres to hold third overall, once his team-mate and Ogier’s title rival Thierry Neuville had lost his way in the dust on the first stage of the morning, slid off the road and slipped down the rankings to eighth at the night halt. Mikkelsen now finds himself 1min 17.1sec behind the rally leader.

In what developed into a dramatic morning on Turkey’s Turquoise Coast, WRC leader Ott Tänak suffered a cruel ECU failure on the road section to SS9 and was sidelined, his demise throwing the title race wide open.

M-Sport World Rally Team’s Teemu Suninen finished the day in a strong fourth and closed the gap on Mikkelsen to just 9.8 seconds at the end of the leg.

With Hyundai management placing great importance on the 2019 Manufacturers’ Championship, Spaniard Dani Sordo managed to fend off the challenge from the Toyotas of both Jari-Matti Latvala and Kris Meeke to reach Asparan in fifth overall. Meeke survived a late scare when the Yaris snapped sideways due to a lack of grip and slid off the road to hand sixth position to his team-mate.

A flat tyre and then a second puncture cost long-time WRC 2 Pro leader Jan Kopecký crucial time and gifted the advantage to England’s Gus Greensmith. The Ford driver reached the end of the leg with a lead of 1min 00.07sec. Series leader Kalle Rovanperä returned to action under Rally 2 after a series of punctures blighted his progress on Friday and held third.

Behind the dominant Kajetanowicz, Bolivian driver Marco Bulacia and Italy’s Fabio Andolfi were second and third in WRC 2.

Bugra Banaz’s dreams of finishing Rally Turkey ended on the road section between the sixth and seventh stages late on Friday afternoon. The Turk’s Ford Fiesta R5 was destroyed in the incident. He was joined on the list of retirements by fellow Turk Denis Fahri, as Tidemand took on the role of ‘road sweeper’ to open the 33km Yeşilbelde stage.

The Swede opened the road for the first time on gravel in a World Rally Car, made his own racing lines along the twisty special and posted the target time on the slippery surface. Latvala moaned that his set-up was wrong and Tänak complained that he was still cleaning the surface from his road position, as the later runners benefited massively from the road conditions.

Mikkelsen survived a brief stall to set a staggering time of 25min 59.8sec and, with the news that Neuville had left the road for well over four minutes after 17km, the Norwegian climbed to fourth behind Lappi, Ogier and Suninen.

Ogier clocked the fastest time of 25min 42.6sec after a gamble to use medium compound tyres paid off handsomely. He whittled Lappi’s lead down to just one second, but Neuville plummeted to ninth on the dust-shrouded special.

“It was a very slow right and left in the dust,” said the disappointed Belgian. “I could not see the corner. There was a stone and it put me out of the road and I had to try and come back.”

The rally continued to cross picture postcard scenery overlooking the sea and the 8.75km of Datça that followed offered breathtaking views of the surrounding coast.  But there was drama for the World Championship leader even before the start: Tänak parked up on the side of the road liaison section to the stage arrival control, as Tidemand continued through the special and set the target time of 7min 22.9sec.

The Estonian’s rivals took full advantage of the shock developments and Ogier pressed home his morning’s advantage to stay within 2.2 seconds of his team-mate. Mikkelsen overhauled Suninen to snatch third overall with the fastest time, as Toyota team management confirmed that electrical issues had sidelined Tänak for the day.

The dejected Estonian said: “I just came here (road section) and nothing happens. Something electrical. Five days ago we stop and start and nothing like this happened. There is no need to control everything now. It is back to the fight now in Wales (Rally GB). Difficult to fight for a championship if we have issues like that!”

The door was now wide open for Ogier to make massive in-roads into the Estonian’s lead in the FIA Drivers’ Championship. Lappi had held the Frenchman off in Datça after starting the loop with harder compound tyres and the new Kizlan stage of 13.30km stood between the duo and a return to Asparan for service.

Much wider, faster and smoother gravel trails that serviced local wind farms were a far cry from the abrasive and rocky tracks drivers had faced on Friday. Lappi clocked the fastest time of 7min 16.7sec – after Tidemand had acted as road-sweeper on the virgin surface – and the Finn took a 10-second lead over Ogier to the service point.

A superb time by Latvala, who “drove like Ari Vatanen”, enabled him to pass Meeke and take sixth after the Ulsterman suffered a spin in the stage. Kopecký stayed clear of trouble to maintain a WRC 2 Pro lead of 1min 10.7sec over Greensmith. Kajetanowicz continued to dominate WRC 2 from Bulacia and Andolfi.

A re-run of Yeşilbelde followed in the punishing heat of the afternoon sun with outside temperatures climbing into the mid-thirties. Tyre wear was excessive and Latvala reached the stage finish with badly worn rubber, despite everyone other than Tidemand opting for hard compounds across the board.

Finishing the stage on two virtually slick front tyres, Ogier clocked the fastest time from his team-mate to reduce the overall deficit to 2.2 seconds. Sordo edged even further away from the two pursuing Toyotas and Suninen kept up the pressure on Mikkelsen in the fight for third. Kopecký stopped early in the stage to change a puncture and the delay gifted the WRC 2 Pro lead to Greensmith.

The second pass of Datça followed and a time of 6min 59.1sec was enough for Neuville to claim the stage win after excessive tyre wear issues dictated the pace of several drivers and Meeke managed to pass Latvala and regain sixth. Lappi stalled on a downhill section under braking and ceded the outright lead to Ogier by 4.7 seconds, despite the Frenchman opting to back off and conserve his tyres.

The second pass through Kizlan wrapped up the day’s proceedings. Meeke’s car snapped sideways on worn tyres, left the road and the resultant delay handed sixth back to Latvala. But there were no such dramas for the Citroën duo at the head of the leader board. Ogier duly headed into the night halt with a 0.2-second advantage over stage-winning team-mate Lappi.

The outcome of Rally Turkey will be decided over four short special stages on the final morning. Crews will tackle the 7.22km Marmaris stage at the start of the morning and then as the Wolf Power Stage finale.

Sandwiched in between will be passes through the 11.52km of Gökçe and the Çiçekli special that runs for 13.20km. Both Marmaris and Çiçekli are identical to the tests used in 2018 but, aside from the opening 1.9km, the Gökçe stage is completely new.