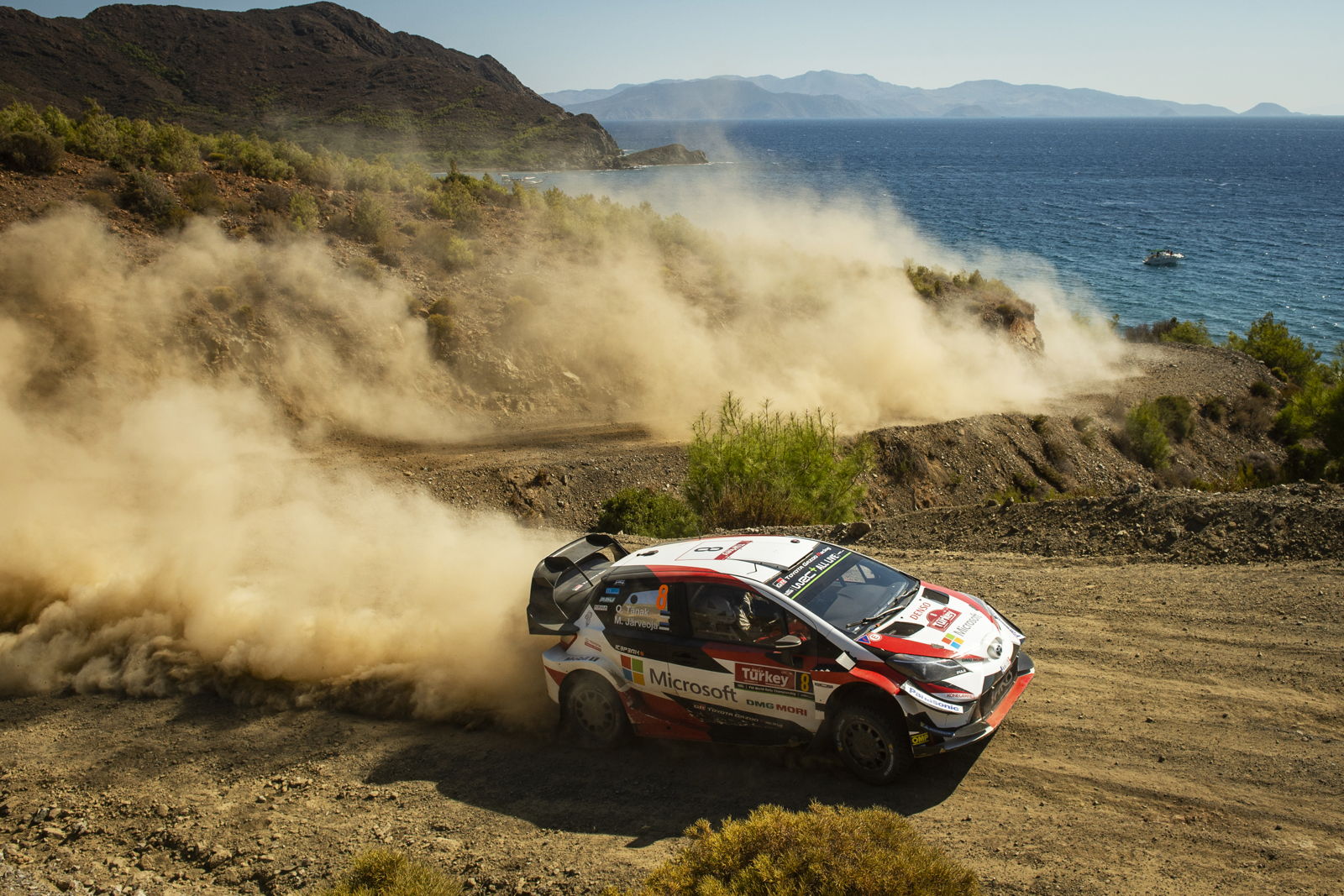 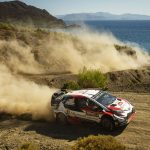 Estonia’s Ott Tanak appeared to be struggling at the start of Rally Turkey’s return to the FIA World Rally Championship after the first gravel stages on Friday.

But the Toyota Yaris WRC driver and co-driver Martin Järveoja were being cautious and began to climb through the field as their rivals were swept aside by dramatic events that have already placed this revised event in rallying folklore.

On Turkey’s return to the WRC for the first time since 2010, Tänak began the final day 13.1 seconds in front of team-mate Jari-Matti Latvala and cruised through Sunday’s four remaining stages to claim the win by 22.3 seconds.

Tänak’s third successive and sixth career WRC victory came on the back of just three stage wins and capped a stunning 1-2 finish for the Toyota Gazoo Racing Team. It also enabled the Estonian to leapfrog the defending World Champion Sébastien Ogier and move into second in the Drivers’ Championship behind Thierry Neuville. Toyota now also leads the Manufacturers’ Championship.

The rally winner said: “It was so difficult. We knew it was good to be in the top five on Friday. Since the beginning this is not the event where the fastest guy will win and we managed to do all the rally with no issues and no stops. It was a great effort from the team. There were no weaknesses. Now it looks interesting. I guess we keep pushing.”

With Neuville restricted to chasing maximum Power Stage points after his retirement on Saturday, Hayden Paddon was given the responsibility of bringing the leading Hyundai i20 WRC Coupe home on the final podium step.

The Kiwi said: “Really happy to be on the podium for the first time this year. It was a tough rally and the strategy paid off. It was a tough weekend for the team and not the result we wanted. I am sure we will come back strongly for the last three rallies.”

The M-Sport Ford World Rally Team is struggling to maintain the momentum in its defence of the Manufacturers’ title and Teemu Suninen’s fourth place was scant consolation on an event where an uncharacteristic mistake by Ogier cost them the chance of a win. Ogier claimed five stage wins but the accident on Saturday pushed him out of the top 10 and he had to rely on the dependable Elfyn Evans to allow him back into the top 10 to claim a vital WRC point. The Frenchman added four Power Stage points to his tally to nullify Neuville’s final stage success, but he now trails the rally winner by 10 points.

Andreas Mikkelsen lost his chance of taking the victory on Saturday, but the Norwegian won two stages, led outright through four and reached the finish in an important fifth place for the Hyundai Shell Mobis World Rally Team.

Forty-five-year-old Norwegian driver Henning Solberg returned to action in emphatic style in a Ford Fiesta R5 that was not registered for WRC 2 points. Proving that experience is vital on events as demanding as Rally Turkey, Solberg and Austrian navigator Ilka Minor reached the finish in a superb sixth overall.

Jan Kopecký overcame a double puncture and a drive shaft failure in his own rally of dramas to give Škoda Mortorsport yet another victory in the WRC 2 category – his fifth in five events. Romania’s Simone Tempestini shadowed the Czech to the finish in second and Great Britain’s Chris Ingram was third. The three drivers were rewarded with seventh, eighth and ninth in the overall classification.

Ken Torn started the day with the advantage in the JWRC category, but the Estonian dropped nearly half an hour to his rivals after leaving the road on the 15th stage and that opened the door for series leader Sweden’s Emil Bergkvist to coast through to take the win and the Junior title. Fellow Swede Dennis Rådström finished second.

Two destructive fires sidelined both Yazeed Al-Rajhi and Craig Breen and Toyota took the decision not to put Esapekka Lappi back into action following the damage sustained in his crash on Saturday. But Mads Østberg, Neuville and Ogier all returned for the remaining four stages.

Action got underway with the first of two passes through the 7.14km Marmaris stage that would act as the Power Stage in the early afternoon. The stage included some asphalt sections in an adopted bus car park area and twisty gravel sections to finish adjacent to the service park. The planned visit by Turkish President Recep Tayyip Erdoğan for the Power Stage had heightened security and the buzz of anticipation increased before the start.

Mikkelsen was first on the road and the Hyundai driver carded the target time of 5min 25sec, only for Paddon to take 3.5 seconds off the Norwegian’s cautious opener. Latvala ran even quicker with a time of 5min 17.4sec on a cleaning surface and Tänak shaved a further two seconds off the fastest time.

Evans ran even quicker (5min 14.3sec), Ogier was 2.2 seconds faster and a determined Neuville stormed to the stage win by beating the Frenchman by 4.9 seconds.

The short Ovacik stage of 8.05km was next on the agenda and road-cleaning duties meant that a cautious Mikkelsen crossed the flying finish in 6min 43.8sec. Paddon was 9.7 seconds quicker than the Norwegian and the rally leader beat the Hyundai by 17.8 seconds to extend his overnight lead over Latvala to 17.6 seconds. Neuville drove cautiously to conserve his tyres, as Ogier claimed the quickest time by pipping a resurgent Østberg.

The 12.65km of Gökçe followed before a break leading up to the Power Stage finale. Latvala was fastest of the early runners with a time of 8min 19.3sec and that was before Elfyn Evans clocked into the start control five minutes early on instruction from the M-Sport Ford team. His fall from seventh to 12th overall put Ogier in a points-scoring 10th place.

Ogier claimed the fastest time again, while Tänak took an outright lead of 19.7 seconds to the final special as the morning’s procession continued and Neuville cruised through the special to conserve his tyres for the final flourish.

Thousands of spectators and a live television audience joined the President of Turkey Recep Tayyip Erdoğan, FIA President Jean Todt and a large number of VIPs for the Power Stage showdown.

WRC 2’s Ingram and his birthday-celebrating co-driver Ross Whittock got the action underway, but the main attention turned to the title contenders chasing vital additional points.

Østberg posted the target time of 5min 10.622sec in conditions that the Norwegian said were more slippery than in the morning. Neuville was next up and clocked a stunning time of 4min 59.586sec. Evans moved into an early second place with a 5min 07.546sec run and then Ogier fell short of his arch-rival with a time of 5min 01.254sec.

A cautious Latvala couldn’t match either Neuville or Ogier and all eyes were on Tänak and whether he would settle for the win or push for the extra bonus points. The Estonian erred on the side of caution, however, and the third fastest time gave him 5min 03.454sec and three points for third place behind his rivals.

The thrilling three-way fight for both the Drivers’ and Manufacturers’ titles heads to Wales on October 4-7.