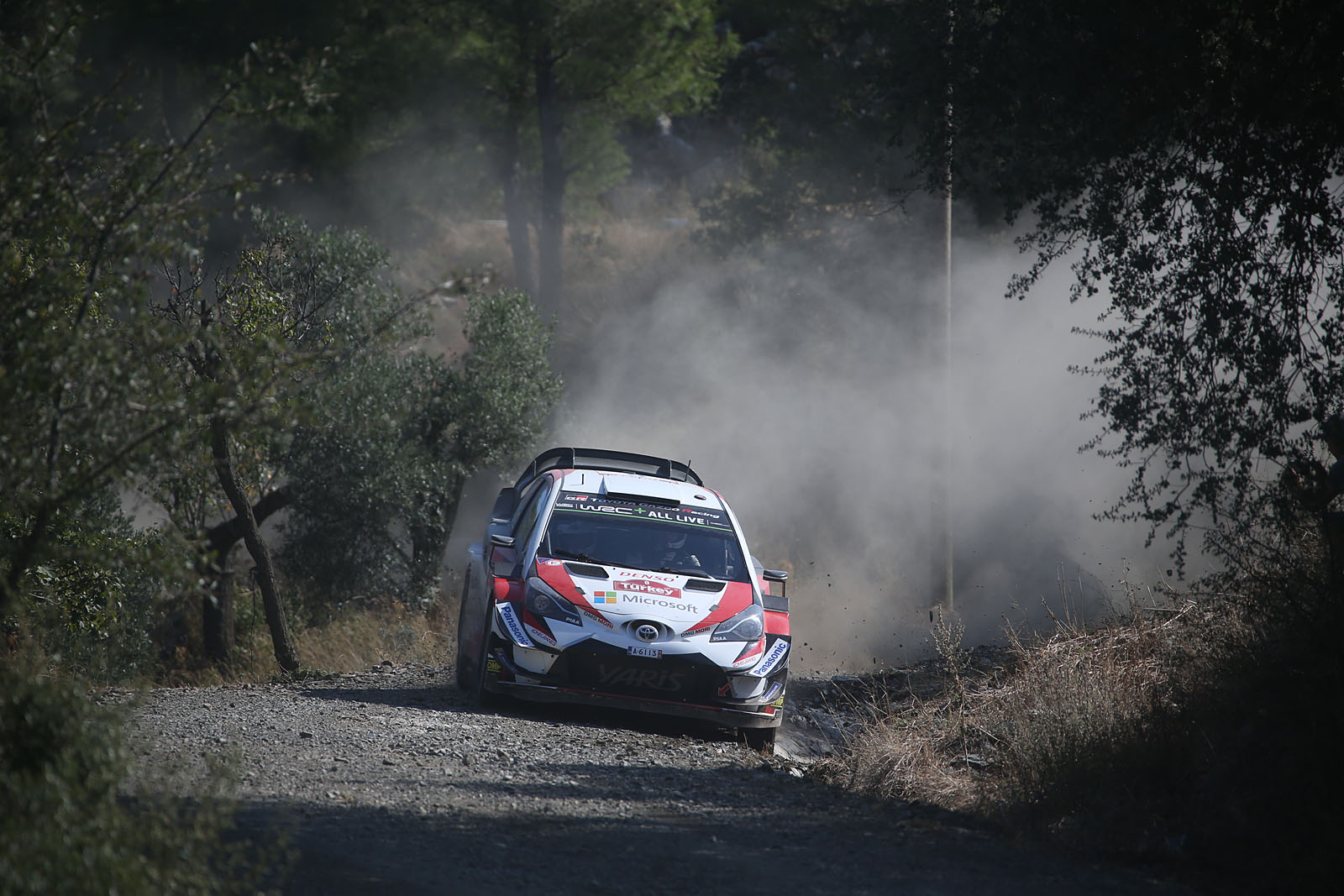 MARMARIS (TURKEY): The Estonian duo of Ott Tänak and Martin Järveoja emerged relatively unscathed from one of the most dramatic day’s in the history of the FIA World Rally Championship to hold a 13.1-second lead in Rally Turkey after 13 special stages.

On an enthralling day, where rival World Championship contenders Thierry Neuville and Sébastien Ogier both retired and Norwegian driver Andreas Mikkelsen lost his lead on the 11th stage, Tänak found himself four stages away from a third successive WRC win in his Toyota Gazoo Racing Yaris WRC.

Team-mate Jari-Matti Latvala ensured that Toyota reached the night halt in first and second positions, while a cautious approach paid dividends for Hyundai’s Hayden Paddon  and he was rewarded with third.

Mikkelsen overcame a transmission issue at the start of the afternoon to reach the night halt in fifth behind Ford’s Teemu Suninen, but a despondent Craig Breen lost out when his C3 was completely destroyed by fire on the road section after SS11.

Neuville’s title dream suffered a severe dent when the front left damper punched through the Hyundai i20’s bonnet at high speed on the first stage of the day. The Belgian had been quickest to that point but plummeted from first to ninth and then retired on the road section when emergency repairs could not be made.

Neuville said: “I don’t think we deserved to be in trouble this weekend. It would have been nice to be in the fight to the en. We changed everything on the car yesterday in the service. Its not over until the finish.”

Ogier survived a broken wishbone and track control arm on stage nine and carried out miraculous emergency roadside repairs. The Frenchman went on to set the fastest time on the 10th stage to move back up to fourth place, but he left the road on the 11th special and retired after getting stuck.

Henning Solberg delivered an impressive performance to hold a remarkable sixth place in his private Ford Fiesta R5. A broken drive shaft cost Jan Kopecký his WRC 2 advantage to Chris Ingram, but the WRC 2 champion elect fought back strongly and regained his lead on the last stage. Outright victory will give the Czech the WRC 2 title.

Germany’s Julius Tannert rolled out of the JWRC lead on stage 10 and slipped behind Emil Bergkvist and Ken Torn. Three Junior drivers were delayed on the 11th stage after a car fire and results were unofficial.

Suninen and Breen were given the task of sweeping the road surface through the twisty opening 34.24km of the Yeşilbelde stage. WRC 2 front-runner Pontus Tidemand was one of four drivers not unable to restart under Rally 2.

Breen misheard a pace note and had to spin the car round to continue, Lappi spun and stalled, Østberg stopped after 24km with terminal turbo issues, but Neuville and Ogier were the class of the field.

The Belgian was setting the fastest time until a front damper punched through the bonnet and ruined the Hyundai driver’s chance of winning the rally. After crawling to the stage finish with the loss of 3min 32sec to stage winner Ogier, the crew carried out frantic work on the car at the roadside and attempted to make emergency repairs as the clock ticked down before the ninth stage.

Ogier duly snatched a 25.5-second over Mikkelsen but Neuville plummeted to ninth place. “I’ don’t know. I didn’t hit anything. Unlucky,” reflected a devastated Neuville.

Tänak set an impressive time as well and closed to within 8.2 seconds of Latvala’s hold on third place after Neuville’s woes.

Narrow, fast tracks through the scenic 10.7km of the Datça special followed with its spectacular backdrops to the sea. Suninen posted the target time of 8min 55.1sec but Breen managed to beat the Finn by 9.1 seconds to consolidate his hold on seventh, despite overshooting a hairpin.

Paddon stalled, as news filtered through that Neuville was en route to Asparan to retire the stricken Hyundai for the day. Tänak trimmed Latvala’s grip on third to just six seconds after his team-mate stalled in a hairpin.

Mikkelsen set the quickest time as the drama continued and Ogier completed the stage with the front right wheel hanging loose with a potential broken front wishbone. He dropped 16.2 seconds to the Norwegian and saw his lead reduced to 7.5 seconds.

The Frenchman pulled to the side of the road to carry out repairs and team-mate Elfyn Evans stopped alongside and offered verbal support via communication with the team in Asparan. Henning Solberg also stopped to give advice as the clock ticked down to the time when Suninen opened the road through the 20.37km of Içmeler.

As Ogier remained at the roadside and began to run the risk of a late stage arrival, Suninen carded the target time of 15min 08.5sec. Lappi left the road after 17km, teetered close to the track on a small banking and then fell into a hole. Tänak managed to pass Latvala and snatch second place behind Mikkelsen by just 2.1 seconds.

The Norwegian’s lead was 36.3 seconds heading back to Asparan after a dramatic morning in the mountains. Ogier actually incurred a one-minute road penalty. After starting the stage in fifth overall he, quite remarkably, set the fastest time and moved back above Paddon and into fourth place.

Kopecký lost his WRC 2 lead to Ingram and reached service 1min 10.8sec behind the Briton after he broke a drive shaft and completed the 10th stage in rear-wheel drive. Tempestini was third.

Action resumed with a rerun of Yeşilbelde. Breen discovered smoke emanating from the under side of the car and stopped for nearly a minute to check the cause. He eventually finished the stage 5min 52sec behind Suninen and slipped behind the Finn into seventh after stopping again later in the special.

Tänak had the bit between his teeth and began a charge. He was consistently quicker than Mikkelsen through the stage and then the Norwegian suffered a puncture, a stall, a spin and slipped to fourth after finishing the stage in rear-wheel drive.

As the Estonian snatched the lead for the first time, second-placed Latvala suffered a flat tyre and hydraulic pressure issues. Ogier left the road 19.8km into the special and retired and his demise handed third place to Paddon. Saudi Arabia’s Yazeed Al-Rajhi also fell by the wayside and the stage was stopped soon afterwards when his car caught fire.

The depleted field headed for Datça 2, but Breen’s rally ended spectacularly and prematurely on the road section when the C3 became engulfed in flames and was completely destroyed.

Suninen duly set the target time of 9min 41.6sec, but the fastest time fell to Latvala after Tänak eased his pace to conserve his tyres for the longer stage to follow. The gap between the Toyota team-mates was eight seconds heading to SS13, as Mikkelsen slipped to fifth behind Suninen after collecting 3min 20sec in road penalties.

Tänak extended his overall lead to 13.1 seconds through the last stage to secure a Toyota 1-2 at the overnight halt and Paddon secured third for Hyundai after a dramatic afternoon on the Turkish Riveira.

Four short special stages bring Rally Turkey to a conclusion. Crews will tackle the first of two passes through the Marmaris special of 7.14km from 10.08hrs. That timed test will act as the final Power Stage at 13.18hrs but will be preceded by the 8.05km of Ovacik and the 12.65km of Gökçe.