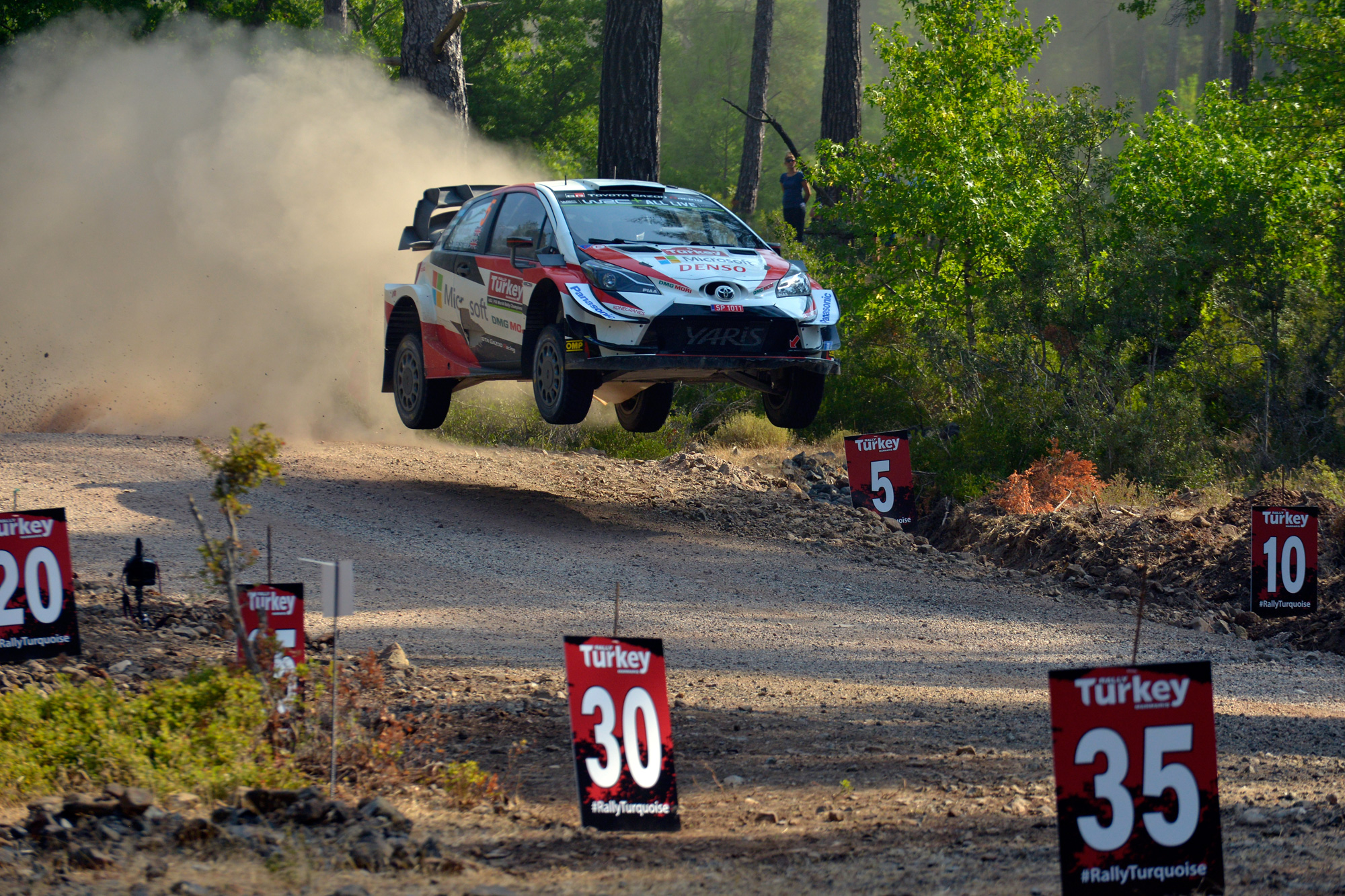 Toyota Gazoo Racing World Rally Team’s Kris Meeke claimed the fastest time of 3min 25.3sec on the 4.7km shakedown stage of Rally Turkey at Değirmenyani on Thursday morning.
The Yaris WRC driver carried out three passes of the gravel stage and his last run was enough to take the early bragging rights in what promises to be an enthralling contest between the four main Manufacturer teams over the next three days. Large crowds of spectators – far in excess of the numbers seen in 2018 – visited the stage to witness the action.
Hyundai’s Andreas Mikelsen finished the session in second place with a best run of 3min 26.3sec and his Belgian team-mate was third in a time of 3min 26.5sec.
Drivers carried out their first passes according to their current positions in the Drivers’ Championship. Ott Tänak acted as the road sweeper and set the target time of 3min 31.1sec. At the stage finish, the World Championship leader said: “We need to have a good weekend. I want the best result possible. Let’s get it going. It is difficult to predict what is going to happen.”
Dani Sordo clipped a big rock in the middle of the road, Lappi finished the test with a rear tyre slightly off the rim, but both survived with the eighth and fourth fastest times. Teemu Suninen was comfortably quickest on the first run with a time of 3min 27.5sec, but Pontus Tidemand complained of an intercom issue.
Gus Greensmith is back in the WRC 2 Pro category for Rally Turkey. After the first pass through the shakedown stage, he said: “It’s going to be a lottery. You can push and get away with it all, or you can take it easy and have a puncture. I guess fate will decide it all this weekend.”
Ogier was the first to post a time on the second pass – a run of 3min 28.3sec – after many of his rivals returned to Asparan for service. Mikkelsen then ran fastest with a 3min 26.3sec, Neuville missed out by two-tenths of a second and then Meeke ran quickest overall with a time of 3min 25.3sec on his third pass, his time demoting Mikkelsen and Neuville to second and third.
The timings of the shakedown session had been modified slightly overnight and the top teams had until 14.00hrs to complete additional passes through the stage. The clock eventually ran down with Meeke’s earlier time enough to win the session.
2019 Rally Turkey – Shakedown Times
1. Kris Meeke (GBR)/Sebastian Marshall (GBR) Toyota Yaris WRC 3min 25.3sec
2. Andreas Mikkelsen (NOR)/Anders Jaeger (NOR) Hyundai i20 Coupe WRC 3min 26.3sec
3. Thierry Neuville (BEL)/Nicolas Gilsoul (BEL) Hyundai i20 Coupe WRC 3min 26.5sec
4. Ott Tänak (EST)/Martin Järveoja (EST) Toyota Yaris WRC 3min 26.7sec
5. Teemu Suninen (FIN)/Jarmo Lehtinen (FIN) Ford Fiesta WRC 3min 27.5sec
6. Sébastien Ogier (FRA)/Julien Ingrassia (FRA) Citroën C3 WRC 3min 28.3sec
7. Jari-Matti Latvala (FIN)/Miikka Anttila (FIN) Toyota Yaris WRC 3min 28.5sec
8. Esapekka Lappi (FIN)/Janne Ferm (FIN) Citroën C3 WRC 3min 28.8sec
9. Dani Sordo (ESP)/Carlos del Barrio (ESP) Hyundai i20 Coupe WRC 3min 29.3sec
10. Pontus Tidemand (SWE)/Ola Fløene (NOR) Ford Fiesta WRC 3min 30.9sec
WRC 2 Entry Changes
Meanwhile, Polish driver Kajetan Kajetanowicz took the late decision to replace his new Volkswagen Polo GTI R5 with a tried and trusted Škoda Fabia R5 in his bid to clinch victory in the WRC 2 category.
Italian rival Fabio Andolfi, who triumphed in the category in Corsica, opted for Emanuele Inglesi in a late co-driver change, but Russian Nikolay Gryazin is a non-starter in his Škoda Fabia R5.
Turkish driver Yildiray Demircioğlu is also a non-starter after entering the rally in a Peugeot 208 R2.