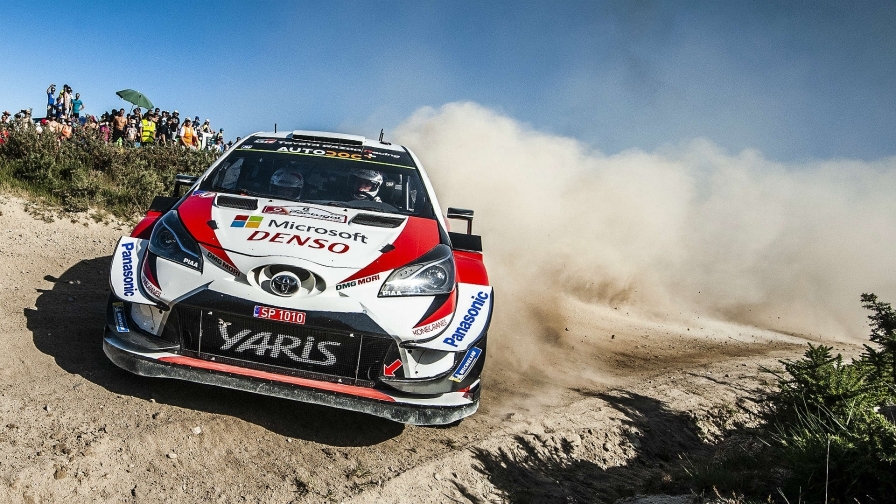 MATOSINHOS (PORTUGAL): Ott Tänak clinched one of the hardest earned victories of his short rallying career after an enthralling final leg of the 53rd Vodafone Rally of Portugal on Sunday.

The 31-year-old Estonian confirmed his ninth career WRC win and his seventh with Toyota Gazoo Racing. A third triumph of the season to follow successes in Sweden and Chile also enabled the Yaris driver to move to within two points of six-time World Champion Sébastien Ogier at the top of the Drivers’ Championship after seven rounds.

He was pushed hard by Toyota team-mates Jari-Matti Latvala and Kris Meeke for one and a half days, overcame brake and suspension issues of his own and maintained his composure when both his Yaris colleagues hit trouble.

He and co-driver Martin Järveoja, crossed the finish line of the final stage 15.9 seconds in front of Belgian title rival Thierry Neuville, the winner even managing to avoid winning the Power Stage that would have given him the series lead and a distinct starting position disadvantage at the next round in Sardinia.

Tänak’s previous best finish in Portugal had been fourth overall in 2017 with the M-Sport World Rally Team. The success was also the first for Toyota in Portugal as a full counting round of the WRC since Finland’s Juha Kankkunen won the event back in 1994 with a Group B Toyota Celica Turbo 4WD.

A relieved Tänak said: “Before the rally is was looking tough. This is one of my hardest victories ever. We had a big fight and some small issues. We managed to win it and I am very happy. We had to hit the brakes at the end to make sure that Seb (Ogier) is leading the championship.”

Neuville now holds third in the title race in his Hyundai i20 Coupe WRC and now trails Ogier by 10 points in what is again developing into a gripping three-way title race. “I am very happy to be at the finish in second place, especially to come back so strong after the big crash in Chile,” said Neuville.

A penultimate stage spin at a hairpin proved costly for Kris Meeke and it deprived Toyota Gazoo Racing of the 1-2 finish they had sought. But it got much worse for the Ulsterman when he spun again at speed in the Power Stage and damaged the Yaris that came to rest across the track. The cruel mistake cost Meeke his place in the rally ad gifted Sébastien Ogier an unlikely podium finish.

Ogier had opted to cruise through the first four stages of the morning to conserve his tyres for a final push on the Power Stage. The Frenchman was rewarded with the five bonus points but the downside was he continues to lead the championship and will open the road in Sardinia later this month.

Esapekka Lappi survived a gently roll in Montim on Sunday morning, clipped a banking and then damaged the rear right suspension in Fafe. The Finn attempted the repair the Citroën C3’s suspension en route to Luilhas, but it was not to be and the unlucky Finn retired from sixth place.

Teemu Suninen inherited a place after Lappi’s mishap on the day’s opener and the Finn eventually brought the first of the M-Sport Ford Fiestas home in fourth overall. Team-mate Elfyn Evans moved up to sixth when Lappi’s retirement was confirmed and then finished fifth to give the Blue Oval a useful haul of much-needed Manufacturers’ points. It had been a trying weekend for the Welshman after the four minutes he lost with a throttle connector issue on day one.

Jari-Matti Latvala disposed of WRC 2 front-runner Pierre-Louis Loubet to enter the top 10 in the third Toyota and eventually finished seventh after Meeke and Lappi retired. It was small reward for the veteran Finn, who had claimed two stage wins and pushed the eventual winner hard for the lead on day two.

Gus Greensmith enjoyed an impressive debut in a World Rally Car. He had been running as high as seventh overall on day two, before planting the factory Ford Fiesta WRC in a ditch. The Briton recovered well and held 11th until he wrecked the Fiesta’s front suspension after a heavy landing and a crash on the Fafe jump on the Power Stage.

Both Sébastien Loeb and Dani Sordo followed Hyundai team orders to support team-mate Neuville after their day one fuel issues. Sordo had led the rally outright for two stages on Friday and set two fastest times, but it was a disappointing event for the duo, exacerbated by last stage suspension woes and a late retirement for Loeb.

Sixth-placed Kalle Rovanperä dominated the WRC 2 Pro category to take the championship lead. He finished 1min 07.7sec in front of Czech team-mate Jan Kopecký. Both drivers delivered impressive performances in the new factory Škoda Fabia R5 Evos to give the Czech car a 1-2 finish on its WRC debut. A series of punctures had ruined Mads Østberg’s challenge in the Citroën C3 R5 and he finished in a distant third place. The Norwegian had the consolation of claiming all five stage wins on the final morning.

Thirteen crews eventually retired before the start of Saturday’s stages and a further six pulled out before the final day, with eight crews rejoining under Rally 2, including Latvala, Greensmith, former WRC 2 leader Takamoto Katsuta and WRC 2 Pro’s Lukasz Pieniazek.

Only 51.77km of timed action was scheduled for Sunday morning and that began with the 8.76km of the first of two passes through the Montim stage, north of Matosinhos.

Greensmith’s reward for restarting was the task of opening the road for his World Rally Car rivals, but all eyes were on the battle for the podium with Tänak taking a 4.3-second lead over Meeke into the opener from 11th position on the road.

In turn, Meeke headed Neuville by just 4.9 seconds, as Hyundai continued its starting order tactics with Sordo and Loeb missing their scheduled start times to assist the Belgian. But would the dust issue make that decision a bad one with two-minute intervals being used?

Greensmith stopped the clocks in 6min 00.3sec, but dust began to linger under the trees and Latvala suggested that it could be particularly bad as the stage progressed. Lappi rolled at slow speed in a hairpin right but still managed to stay 6.1 seconds in front of Suninen. “I started to spin on the hairpin and the inside bank turned us over,” said Lappi, who damaged the C3’s windscreen and rear aero in the incident. “It was very easy to roll.”

Neuville set a stunning time of 5min 51.3sec, but Meeke was even faster than his rival to increase the gap to 7.1 seconds in the battle for second place. The Ulsterman also reduced Tänak’s lead to just 2.4 seconds with the fastest time. Rovanperä increased his WRC 2 Pro advantage over team-mate Kopecký to 1min 03.0sec.

The first run through the famous Fafe stage followed with three-minute intervals between the cars. The 11.18km would act as the Power Stage finale at lunchtime and the first pass was a crucial one for several drivers aiming for the vital bonus points on offer. Greensmith carried out road cleaning duties and Latvala posted the target of 6min 48.8sec.

Suninen overhauled a struggling Lappi to snatch fifth place after his fellow Finn ran wide, hit a banking and finished the stage with a collapsed rear right wheel and the real threat of not being able to continue. Sordo stormed through the special 5.5 seconds faster than Latvala, only for Neuville to stop the clocks 0.6 seconds quicker than the Spaniard. It was not enough, however, and Meeke edged a further 1.1 seconds away from the Belgian. Tänak set the fastest time to move 5.4 seconds in front of his team-mate.

Lappi was forced to work on his damaged suspension on the road section to the start of the 11.89km of the Luilhas stage to try and salvage points for Citroën. But the team soon confirmed that he was not able to continue and Evans was promoted to sixth overall and Latvala re-entered the top 10 before passing WRC 2 leader Loubet to snatch ninth.

Meeke managed to edge further clear of Neuville but there was no denying Tänak and a fifth fastest time gave the Estonian a cushion of 8.1 seconds to take to the penultimate stage at Montim. Rally officials used three-minute intervals to prevent any dust issues in the special and Neuville clocked the quickest time, as Ogier, Latvala, Evans and Sordo conserved their tyres for a final Power Stage push for bonus points.

Meeke blotted his copybook with a spin at a hairpin and the Ulsterman had to drive a little in the opposite direction before he could turn around. Agonizingly, he dropped 17 seconds to the stage winner and ceded his second place to the Belgian. Tänak headed to the Power Stage with a lead of 16.6 seconds.

A distraught Meeke said: “It was a hairpin and it hooked up. I thought I was round it and the nose clipped the bank. I got caught in my dust and could not get a gear.”

Massive crowds had gathered to watch the customary Wolf Power Stage at Fafe with television images beamed live around the world. Four-minute intervals were handed to competitors and the WRC 2 Pro entrants were the first through the special.

Sordo set the target time of 6min 40.113sec but Loeb damaged the rear right suspension of his i20 after sliding wide on a corner and ruined his challenge. Greensmith stunned the crowds by spinning violently into the banking after the famous Fafe jump and the impact broke the Ford’s suspension and the car stopped partially blocking the track. The factory car debut was over for the youngster in spectacular fashion.

Seven World Rally Cars remained in contention for the stage win, but Latvala’s run was red-flagged after the Greensmith incident and he had to wait for rally officials to decide whether he would pass Kopecký and earn seventh overall. Evans pushed hard and fell 1.167sec short of the Spaniard but Suninen moved to the top of the rankings with a 6min 39.045sec run.

Ogier crushed his rivals thus far with a devastating time of 6min 35.053sec, but news filtered through that Meeke had spun on the stage, damaged the car and blocked the track, the impact costing him third place and promoting Ogier to a podium finish.

There was a delay while a recovery truck removed Meeke’s stricken Yaris from the stage. Neuville began his attack and the Belgian fell 0.877sec short of Ogier to slot into second on the special after opting for hard tyres on the final push.

Would Tänak risk having to open the road in Sardinia for the additional Power Stage points? The Estonian pushed hard and set the third fastest time behind Ogier and Neuville to claim three bonus points. Suninen and Sordo collected the other available points, but Tänak hinted that he has lifted near the end to give himself the advantage at the start of the next round….