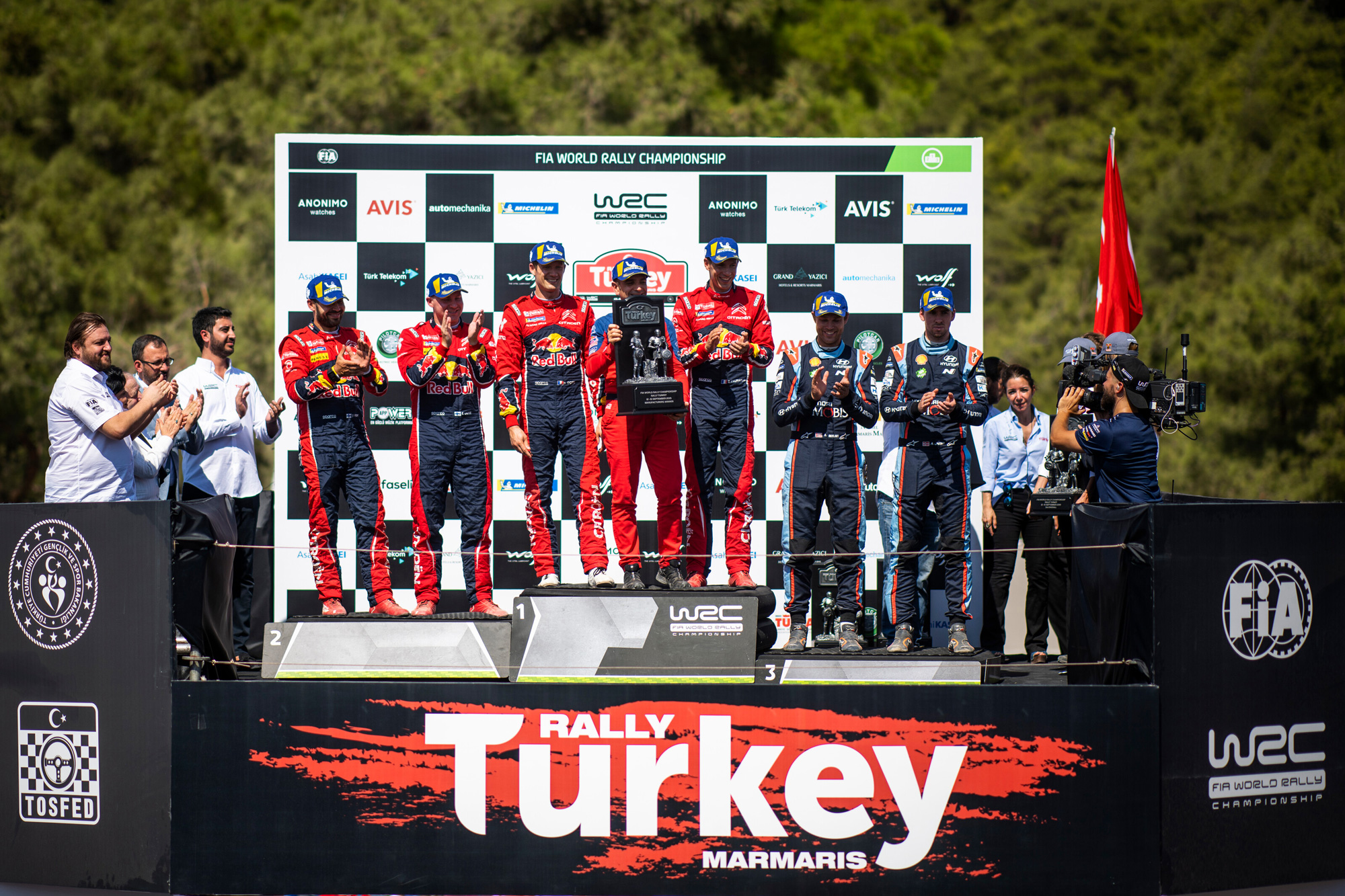 Needing to secure maximum points to realistically continue his challenge for a seventh successive world title, the Frenchman benefited from the electrical misfortune that plagued series leader Ott Tänak and an accident that cost Thierry Neuville valuable minutes on Saturday.

By picking up an additional three bonus points on the final Power Stage, Ogier now heads to the remaining three rounds of this year’s championship 17 points behind the leading Estonian after starting the weekend 40 adrift.

Esapekka Lappi took the fight to his triumphant team-mate from the opening gravel stage. The Finn led from stages three to 11, secured three stage wins and, despite an overshoot and a spin, delivered an impressive performance to give the French manufacturer a first one-two finish since Kris Meeke and Mads Østberg prevailed in Argentina in 2015 with a pair of DS3 WRCs.

The 34.7-second win was a 47th career WRC success for Ogier and a first since Mexico in early March this year.

The delighted Frenchman said: “This was the plan for the weekend. It was really needed. It was our only chance to get back in the championship. It was very rough here. Some places it was a bit of a lottery. We had all the bad luck in Germany. I am happy for the team. Good motivation. It has been good this weekend, but we still have a lot of things to do for the rest of the season.”

The final morning developed into a procession with the three title contenders conserving their tyres for a final Power Stage push.

Hyundai Shell Mobis World Rally Team’s Andreas Mikkelsen delivered vital points for the Korean manufacturer with third overall. The Norwegian claimed three stage wins in his i20 and was easily the class of the rest of the field behind the Citroën duo.

M-Sport Ford World Rally Team’s Teemu Suninen’s challenge for the podium fizzled out on the final morning, but the Finn was able to deliver fourth place in Turkey for a second successive year.

Fifth overall for Spaniard Dani Sordo handed Hyundai crucial points for the Manufacturers’ Championship and enabled the team to move 19 clear of the Toyota Gazoo Racing World Rally Team. The Toyotas of both Jari-Matti Latvala and Kris Meeke reached the finish in sixth and seventh overall. Latvala recorded three stage wins and Meeke one.

Thierry Neuville conserved his tyres on the final morning to challenge for the Power Stage win and the Belgian collected four bonus points to add to his eighth overall, an accident on Saturday morning potentially wrecking his title dream for another season.

M-Sport Ford’s Pontus Tidemand delivered a measured drive to ninth place in the second of the works Fords and WRC leader Ott Tänak was last of the factory team drivers after his electrical woes on Saturday. The Estonian opted to take no spare wheel in his Yaris for a flat out push on the Power Stage and he at least salvaged a maximum five bonus points from a train-wreck of a weekend as far as his title aspirations were concerned.

England’s Gus Greensmith returned to the WRC 2 Pro section after recent forays in an M-Sport Ford Fiesta WRC and repaid the team’s loyalty with maximum points in his category and 10thoverall, despite an accident after the flying finish of SS16 that left the Ford looking decidedly worse for wear at the finish.

Both the works Škodas of Jan Kopecký and Kalle Rovanperä suffered a series of punctures during the weekend and had to settle for second and third in WRC 2 Pro, the former finishing as runner-up in 11th overall – 29.4 seconds behind Greensmiith – after leading the category for long periods.

Poland’s Kajetan Kajetanowicz made a late switch from a Volkswagen Polo GTI R5 to a Škoda Fabia R5 and showed a clean pair of heels to his WRC 2 rivals. A fine drive was rewarded with 12thoverall, although he suffered a late front left drive shaft breakage on the penultimate test and lost two places in the overall rankings to his WRC 2 Pro rivals. His consolation was the joint lead in the 2019 WRC 2 Championship.

The final morning began with a first opportunity to pass through the 7.22km Marmaris test that would act as the Wolf Power Stage finale. The stage began close to Içmeler and finished at Asparan and series leader Tänak was tasked with opening the road after his cruel electrical woes on Saturday.

The Estonian left the start line with no spare wheel in a desperate bid to claim maximum Power Stage points on SS17. With a substantial weight saving, the Yaris driver clocked the target time of 5min 04.7sec. “What do I gamble? Gambling zero points is not a gamble,” quipped Tänak.

Mikkelsen edged 3.6 seconds further ahead of Suninen in the scrap for third place and Ogier extended his advantage over a cautious and slowing Lappi to 5.7 seconds. But no-one could match the time set by Tänak, who claimed his first stage win of the weekend. The scene was set for an enthralling second pass through the special in the battle for Power Stage points around three and a half hours later.

Next on the agenda was a single pass through Gökçe (11.52km). To say that Tänak cruised through the special at a canter to conserve his tyres was an understatement. He crossed the flying finish 50.6 seconds slower than Tidemand, as Neuville also eased his pace considerably and Latvala clocked the fastest run of 8min 34.1sec in his bid to keep the pressure on Sordo in the fight for fifth.

Ogier and Lappi tied with the fifth quickest time. The Finn said: “The pressure’s not coming from the guys behind. It’s coming from the event itself. It’s the roughest of the season and you need to be safe. I am happy to be in this situation.”

The penultimate test was the longest of the morning – the 13.20km Çiçekli special. Tyre conservation was the main priority with large gaps between the respective positions inside the top 10. The fastest time fell to Mikkelsen with a run of 11min 01.3sec, although Lappi survived a scare after spinning his C3 early in the stage and he lost 21 seconds to the stage winner.

On the Wolf Power Stage, it was crucial that Tänak tried to pick up some scraps from his ruinous weekend. Running first of the World Rally Cars on the road with partly worn tyres was not ideal, however, but the Estonian clocked a staggering target of 4min 55.208sec.

Tidemand fell short by 10.4 seconds and Neuville was also 2.6 seconds behind Tänak. Attacking his team-mate’s time was never an option for Meeke and he consolidated seventh overall. Likewise, Latvala, Sordo and Mikkelsen were never going to challenge the faster times of their respective team-mates.

Suninen carded a 5min 04.267sec, slotted into fourth and that left the door open for the leading C3 duo to wrap up the Power Stage battle. Lappi erred on the side of caution, but Ogier went into full attack mode and a time of 4min 58.404sec gave him three bonus points for third place, the five precious points falling to Tänak and Neuville claimed four.