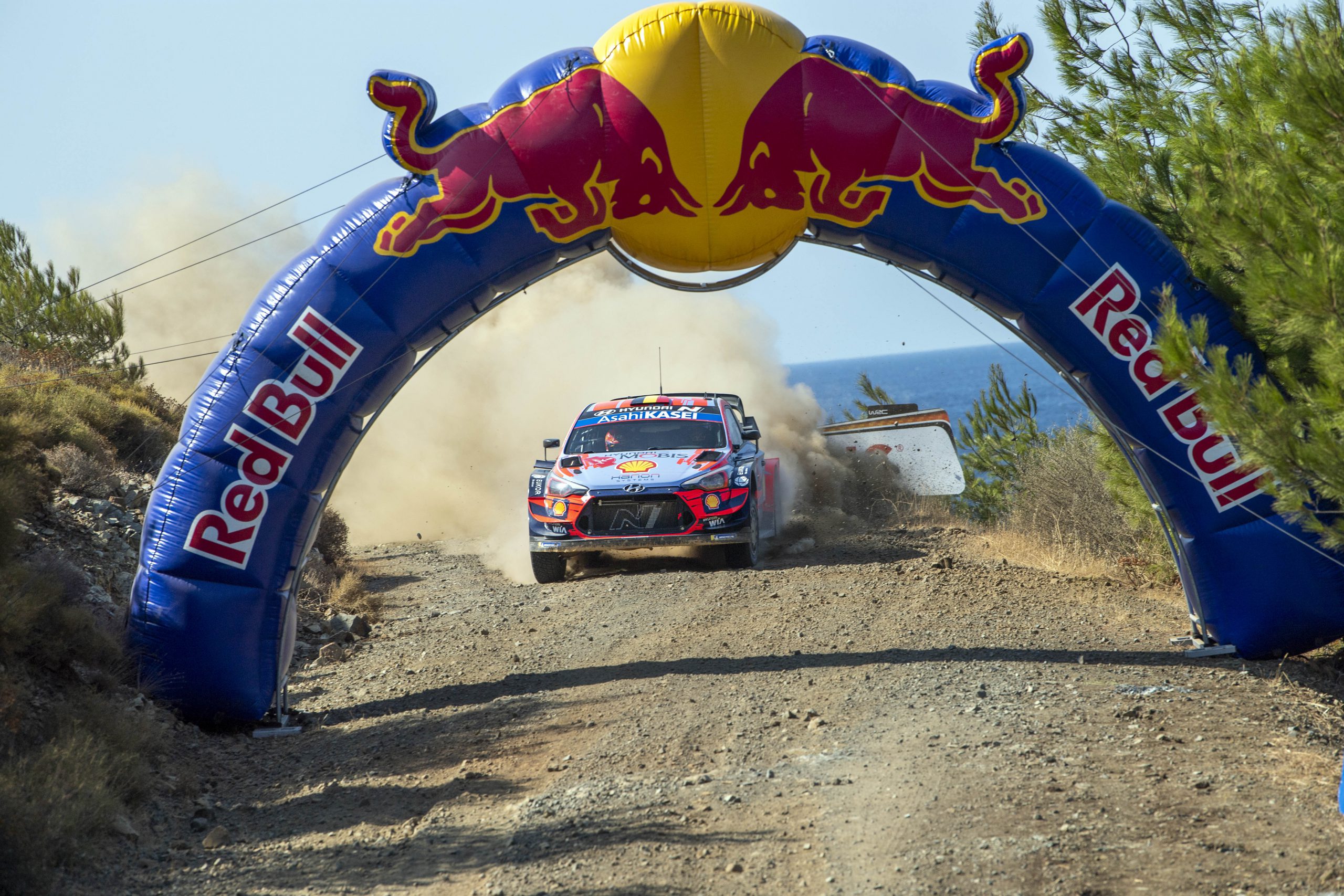 Three consecutive fastest times from Saturday’s six punishing gravel stages and a puncture and minor hydraulic issue for arch rival Ogier have given the Belgian driver the perfect foundations on which to push for a maiden success on Turkey’s Turquoise Coast.

“The afternoon was much better than the morning,” said an upbeat Neuville. “We worked on the set-up and I was happy with the car in the rough sections. The engineer was pushing for some changes and it worked well. A great job, the team has done. Tomorrow, we have the roughest stage of the rally. We need to avoid punctures and still drive fast. Hopefully we are going to survive.”

With defending World Champion Ott Tänak out of the equation with massive time penalties caused as a result of a third-stage steering failure and now relying on trying to score a maximum five points on Sunday’s Power Stage finale, Neuville and Welshman Elfyn Evans both have ideal opportunities to further stake their claims on a maiden world title and pile the pressure on the series-leading Ogier.

The Frenchman and Neuville traded stage times on the morning’s loop and a mere 1.6 seconds separated them at the midday service halt before Ogier sustained his flat tyre and slipped to third. The Toyota Yaris driver moved back up to second on the penultimate stage, only to see Sébastien Loeb win the last timed test and match his overall time to the fraction of a second.

Evans was waiting in the wings hoping to pounce on any mistake made by the leading duo. The Welshman couldn’t quite find the pace to match his team-mate or his Belgian rival during the morning but is still in the heat of battle heading into a final morning showdown, despite slipping down to fourth at the night halt.

Loeb lost his overnight lead on the first stage of the day, largely as a result of a poor tyre choice and the furious pace of his rivals, and he became embroiled in a tussle with Kalle Rovanperä for fourth. But a puncture for the fifth-placed Finn in SS6 eased the pressure on the veteran and he pressured Ogier and Evans to the finish, duly overcoming excessive tyre wear to win the final stage.

Neither of the Finnish M-Sport drivers could break the dominance at the top of the leader board, despite the Ford mechanics working hard to optimise the best settings for the Ford Fiestas. Teemu Suninen and Esapekka Lappi reached the night halt in sixth and seventh.

Gus Greensmith guided the third of the M-Sport cars to eighth and Pierre-Louis Loubet continued his rapid learning curve in a Hyundai i20 to hold ninth, the Frenchman’s stage times improving as the afternoon progressed.

Poland’s 10th-placed Kajetan Kajetanowicz displaced Marco Bulacia on the morning’s opener to take control of WRC3 and he overhauled WRC2 leader Adrien Fourmaux before the midday break. The latter stopped for two minutes in stage six after a flat tyre and gifted his WRC2 advantage to Sweden’s Pontus Tidemand.

Drivers plunged straight into the perils of the 31.79km Yeşilbelde stage and road-sweeping duties fell to Pierre-Louis Loubet and Gus Greensmith.

The FIA field had been whittled down to 22 overnight following the retirements of American Sean Johnston and Qatar’s Nasser Saleh Al-Attiyah. Both WRC3 cars sustained accident damage after incidents in the opening stages on Friday afternoon.

Tänak was the quickest of the early runners and was on course to post an impressive stage time until he veered off the track 25.9km into the stage and collided with the banking. The crew managed to move the stricken Hyundai into a safe position further down the track and tried in vain to repair the damage, only to retire with hefty time penalties to follow.

Rovanperä carded the target of 25min 14.8sec but Evans shaved 11.8 seconds off the Finn’s effort to remain in fourth place. Attention then focused on the tussle between Ogier, Neuville and Loeb for the stage win. Loeb struggled with grip, ceded a handful of seconds as the stage progressed and slipped to fourth overall, but Ogier snatched the win and a 1.7-second outright lead with a time of 24min 54.2sec.

Brynildsen dropped time to WRC2 rivals Fourmaux and Tidemand with a puncture before stopping near the stage finish when a wheel became detached and Kajetanowicz moved in front of Bulacia in WRC3.

The front-runners headed to the faster and softer Datça stage (8.75km). Rovanperä found himself locked in a tussle for fourth with Loeb and the Finn pushed hard to card a time of 6min 56.1sec. It gave him the fourth fastest time and he headed to Kizlan trailing the nine-time World Champion by 3.5 seconds.

The stage win fell to Ogier and the Frenchman extended his lead over Neuville to three seconds, his rival complaining that tyre choice had made the difference.

After a 14-minute delay while unauthorised spectators were removed from a section of the high-speed 13.15km special, action resumed with four World Rally Cars already en route to service and a regroup in Asparan after completing the stage. Neuville snatched the win and headed to the midday break trailing Ogier by just 1.6 seconds.

Team engineers worked in Asparan to come up with the best tyre choice and car set-up for the repeat loop of three stages, crews knowing full well that temperatures were already into the low thirties Centigrade and the abrasive surfaces would have deteriorated still further after the morning loop.

Road-opener Loubet locked the brakes and stalled near the finish with a puncture, but still shaved 13 seconds off his morning’s run through the rock-strewn special. Greensmith sustained a rear puncture and Suninen was quickest of the early runners with a target of 25min 03.5sec, despite damage to the Ford Fiesta’s underside.

But the battle behind was heating up nicely with Evans beginning to pressurise Ogier and Neuville leading the Frenchman through the split times. A puncture proved costly for Rovanperä and he slipped further behind fourth-placed Loeb and 38.2 seconds behind Evans.

Ogier was also in trouble, however, and the Frenchman plummeted behind Evans and into third and trailed new leader Neuville by 21.8 seconds after sustaining a front-left puncture and suffering a minor hydraulic issue. Ogier also tumbled dangerously close to a charging Loeb – the nine-time World Champion was a mere 0.3 seconds behind….

Fourmaux lost his WRC2 lead to Tidemand after stopping four kilometres into the stage for two minutes.

Drivers were noticeably easing their pace and trying to conserve tyres for the longer eighth stage and Ogier set the second quickest time on the re-run of Datça. The Toyota Yaris driver was able to regain second place from Evans by 3.2 seconds after a storming run. Neuville defended his lead with the fastest time and headed to Kizlan with a 30.1-second advantage.

Loeb closed to within 0.8 seconds of an over-cautious Evans and overhauled the Welshman, when the Yaris struggled through the last stage with serious tyre issues and Evans dropped a hefty 28.4 seconds to the veteran. A second fastest time enabled Neuville to extend his overall lead to 33.2 seconds but the Belgian has an astonishing 15 world titles breathing down his neck in the guise of Ogier and Loeb.

Two passes through two stages constitute a much longer final day’s timetable than usual. At 38.15km, the Çetibeli stage is the longest of the rally and this precedes the first pass through the 7.05km of Marmaris that will also act as the Power Stage finale after the re-run of Çetibeli.

Rally Turkey is running with the valuable backing of the Republic of Turkey Ministry of Youth and Sports, Turkey Tourism Promotion and Development Agency and Spor Toto. Crucial sponsorship for the event comes from AVIS, Grand Yazıcı Club Turban, Turk Yacht, Pilotcar, Ahu Hastanesi, Mr. No Dardanel, Auto Club and Marmaris Municipality. Communications support comes from Turk Telekom and the event is being broadcast live on TRTSPOR2.