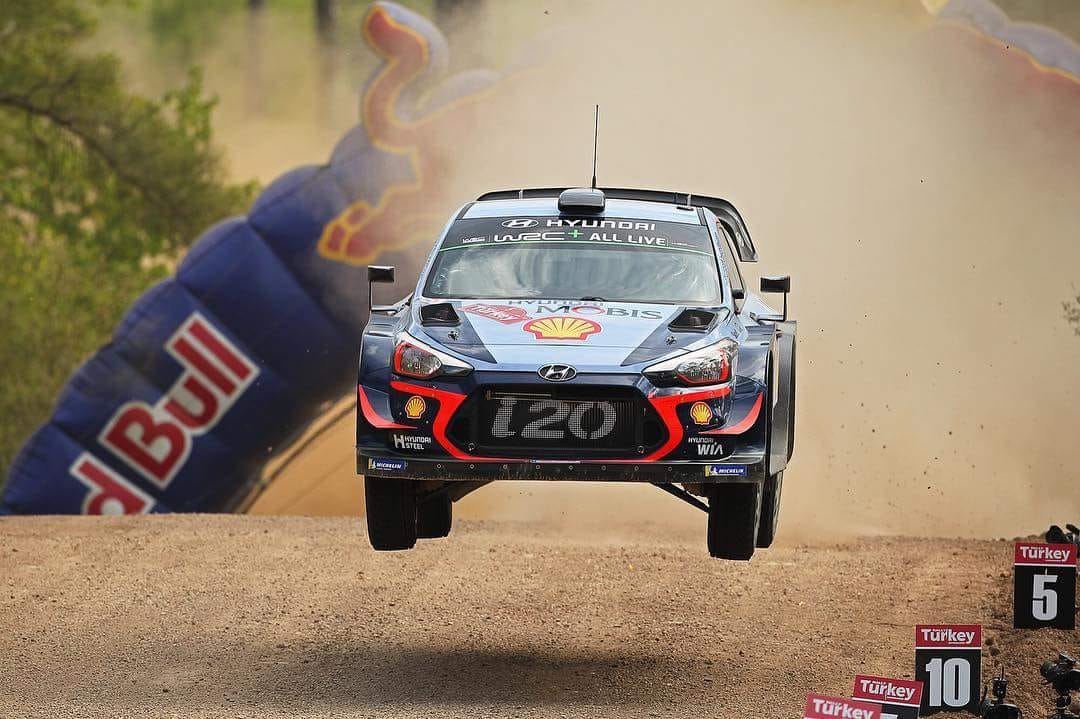 Toyota Gazoo Racing’s Jari-Matti Latvala stayed out of trouble to hold fourth position and Estonia’s Ott Tänak climbed to fifth at the expense of Hyundai’s Hayden Paddon with the fastest time on the last stage of the day. A costly slow puncture and further tyre issues dropped a despondent Craig Breen from second to an eventual eighth place behind Esapekka Lappi, while Teemu Suninen was ninth in the third of the M-Sport Fords.

The rate of attrition was relatively low on the first loop of three treacherously rough and dusty special stages, but the deteriorating road surface caused havoc late in the day. Punctures abounded and both Ford’s Elfyn Evans and Citroën’s Mads Østberg damaged their front suspension on the penultimate special of the day and retired.

WRC 2 runners didn’t escape the mayhem either and both title favourites, Jan Kopecký and Pontus Tidemand, suffered a double puncture on the fifth stage and fell back into the chasing pack.

After delays for Kajetan Kajetanowicz and disappointment for Murat Bostanci, Pedro Heller and Simone Tempestini, Chris Ingram was the main beneficiary. He led with one stage to go before slipping back to second, 16.3 seconds behind a resurgent Kopecký, as Tidemand dropped a further 50 seconds with ongoing tyre woes.

Veteran Henning Solberg was enjoying a superb return to the WRC and held 10th overall heading to the final stage. Germany’s Julius Tannert was the class of the JWRC field after six special stages. Ireland’s Callum Devine and Estonia’s Ken Torn were second and third.

Friday – as it happened

The meat of the action got underway with a gruelling 38.10km Çetibeli special stage on Friday morning. Neuville was first on the road but an overnight thunderstorm dampened the dust and left the surface greasy in some places from the start before it began to hang under the trees later in the special.

Neuville complained that a fire alarm had woken him from his slumber in the hotel in the early hours of the morning but the Belgian opened his account with a time of 28min 49.9sec. Ogier, Tänak and the remainder of his rivals complained of serious dust and visibility issues, but the stage win went to new overall leader Breen from Paddon and Mikkelsen.

Evans lost his intercom and dropped half a minute after clouting a bank in the dust. Kopecký pipped Tiemand by 0.7 seconds to the fastest time in the WRC 2 duel, but Gus Greensmith left the track and got stuck, Kajetan Kajetanowicz lost his power steering and Murat Bostanci retired with broken front left suspension.

Action resumed with the 21.75km of Ula after a remote refuelling stop and Neuville carded a time of 16min 14.8sec, despite wheel spin and road surface cleaning duties through running first on the road.

He managed to edge further clear of a despondent Ogier and actually won the stage, as many of his rivals eased off over the rocky sections to the finish and Evans stopped with a rear differential fluid leak after the stage finish and was set to be withdrawn by the M-Sport Ford team. Breen’s lead over Mikkelsen was reduced to 3.4 seconds and Kopecký extended his WRC 2 lead over Tidemand to nine seconds.

The recently-regraded Çiçekli test of 12.55km was next up before a return to service in Asparan and Neuville carded 10min 34.6sec. Ogier clawed 2.5 seconds back but the softer compound tyres offered better grip for Mikkelsen and the Norwegian claimed the stage win and a 6.3-second lead over Breen to take to the service halt.

Evans managed to continue with the loss of over one and a half minutes and his Fiesta’s rear suspension assembly was replaced by M-Sport mechanics at the service point. Tidemand reduced Kopecký’s lead in WRC 2 to five seconds.

Teams envisaged that tyre wear would increase on the afternoon loop because of higher temperatures and rougher stage surfaces. The rate of attrition had been surprisingly low during the morning.

Ogier began to attack and he stole 18.2 seconds from Neuville, despite the Belgian being 36 seconds quicker on his second pass. It meant the Frenchman moved 7.7 seconds ahead of his rival in the overall standings and into second position behind leader Mikkelsen and ahead of Neuville. Breen ceded over 45 seconds with a shredded slow puncture, as his Friday curse continued and he plummeted from second to eighth place.

Østberg finished the stage with a delaminated front tyre, Khalid Al-Qassimi stopped after 8.5km and Kopecký lost his WRC 2 lead after stopping to change two tyres that left his with no spare for the last two stages. He rejoined just behind Tidemand and lost further time in the dust, but Tidemand also stopped to replace two punctures. Their problems should have opened the door for Simone Tempestini to snatch the WRC 2 lead but, when the Romanian stopped on the stage, Chris Ingram gained the lead.

The rerun of Ula quickly followed and Neuville moved ahead of Ogier and into a provisional second place. His pace was such that Mikkelsen’s outright lead was trimmed to just 1.5 seconds after the Norwegian dropped 18.5 seconds with a rear flat tyre.

The leading trio were separated by just three seconds heading to the final stage of the day, but Evans clouted a rock, damaged the Ford’s suspension and retired and Østberg also ground to a halt with damaged front suspension within sight of the stage finish.

Neuville lost a handful of seconds with a slight overshoot early in the seventh stage, but the Belgian reached the end of the day 3/100ths of a second ahead of Ogier and gained the lead after Mikkelsen slipped to third place. Tänak was rewarded with an impressive fastest time after lowering the ride height on the Toyota and he moved ahead of Paddon into fifth.

Competitors will tackle a further two loops of three special stages on Saturday with the 34.24km of Yeşilbelde at 08.35hrs. Runs through Datça (10.70km) and Içmeler (20.37km) follow and the three timed tests are repeated in the afternoon after a return to Asparan for the midday service and regroup.