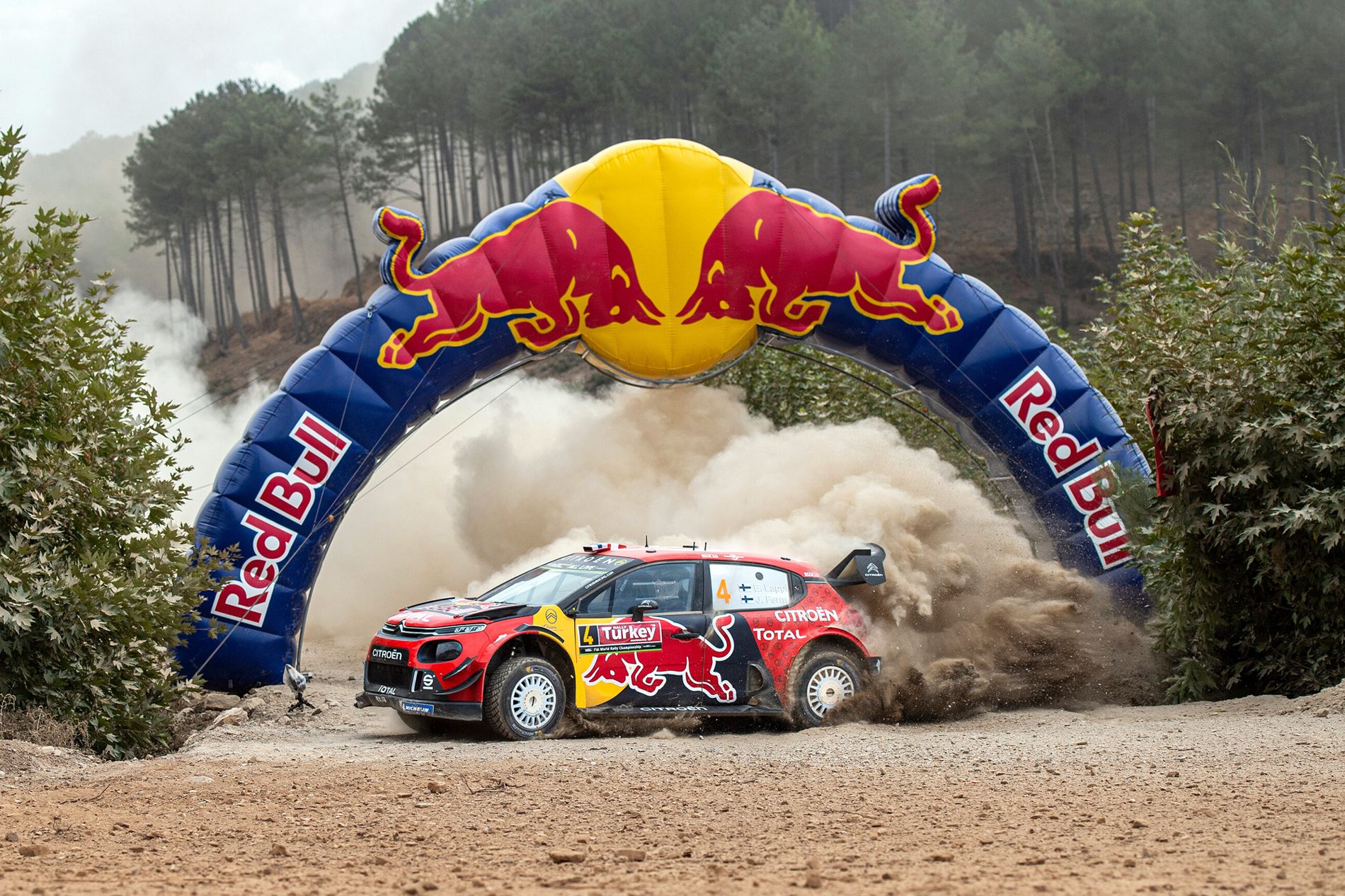 Citroën’s Lappi Rocks The Establishment To Lead In Rally Turkey

Abrasive stage surfaces, large rocks, critical tyre choices, heavy rain on one stage and the threat of the unknown forced every driver to err on the side of caution to protect their cars. But Lappi and co-driver Janne Ferm guided their C3 WRC to a stage win and a useful overnight advantage over team-mate and six-time World Champion Sébastien Ogier.

“That’s cool (to be leading),” said the Finn. “They were tricky and slippery stages. We managed it well. The car has been strong. Seventeen seconds is a lot in Finland, but one minute is not so much here!”

Like Ogier, Hyundai Shell Mobis World Rally Team’s Thierry Neuville kept his title hopes alive with a stage win and third overall, a useful tyre choice in the rain on the longest stage of the day helping the Belgian finish the leg just 0.7 seconds behind his French title rival.

A fastest time on the last stage of the day enabled Dani Sordo to leap frog both Kris Meeke and Ott Tänak to snatch sixth place, the Spaniard having lost a lot of time with a flat tyre in SS2. A puncture proved costly for series leader Tänak as well and the Estonian now trails the overnight leader by 1min 37.4sec. Meeke, likewise, had tyre issues and a broken jacking point on the Yaris, although he did claim a stage win.

The Ulsterman’s Toyota team-mate Jari-Matti Latvala claimed two stage wins, but a puncture, a poor tyre choice and little niggling issues cost the Finn the outright lead he held at the end of SS2. He held ninth place with M-Sport Ford’s Pontus Tidemand rounding off the top 10 on his return to the main factory team.

Friday the 13th placed its curse on WRC 2 Pro leader Kalle Rovanperä. The Finn sustained a puncture and a roll on the opener and then two further flat tyres put him out of the running for the rest of the day. A flat tyre for rival Gus Greensmith played into Jan Kopecky’s hands and the Czech headed to the night halt 1min 22.8sec in front of the Briton after erring on the side of caution towards the end.

Friday – as it happened

Series leader Tänak was the first into the opening 24.80km of the Içmeler stage. Abrasive gravel, punishing heat and the real risk of punctures lay in wait with the threat of rain from midday to add to teams’ worries.

The Estonian carded an opening time of 18min 20.3sec after running faster than both his main title rivals through all the split times on the special. Neuville and Ogier dropped 7.4 seconds and 5.2 seconds, respectively, to Tänak, although the Belgian had opted to conserve his hard compound tyres for the 38.15km Çetibeli stage that followed and Ogier finished the stage with a slow puncture.

Latvala claimed the fastest time of 18min 12.4sec from Lappi and edged into an outright lead of 1.1 seconds, as news filtered through that rain was already falling at the end of the Ula stage (SS4).

Sordo dropped 47 seconds to the stage winner after sustaining a front-left puncture around 14km from the finish and Tidemand’s return to a World Rally Car was also blighted by a right-rear flat tyre.

In WRC 2 Pro, Rovanperä blotted his copybook by rolling the works Škoda after losing his concentration following a puncture. The loss of over four minutes gave Kopecký and Greensmith a big advantage.

Run one through the rally’s longest stage followed if there hadn’t been enough drama already. The series leader posted the target of 28min 17.6sec, gained another 8.5 seconds on a frustrated Neuville but ceded 7.7 to a flying Ogier. An impressive Lappi set the fastest time and snatched an outright lead of 2.1 seconds over Mikkelsen, as Latvala erred too much on the side of caution and slipped to fifth.

The new leader said: “Very clean stage. I just kept it on the line all the time. That is the secret. You need to have margin in every corner to avoid the rocks.”

Both Greensmith and Rovanperä haemorrhaged time to Kopecký in WRC 2 Pro with flat tyres, but three punctures for the latter meant that he had little chance of reaching service. Kajetanowicz was in early control in WRC 2 and running ahead of Kopecký in the overall standings.

The Ula stage (16.57km) preceded a return to Asparan for service. Tänak safely negotiated it to hold sixth at the break, but the fastest time fell to Latvala and Lappi took a nine-second lead over Mikkelsen back to the lunch halt. Latvala, Ogier and Suninen rounded off the top five, with Kajetanowicz the best of the WRC 2 section.

A thunderstorm was forecast for around 16.00hrs, as action resumed with the re-run of Içmeler. Loose gravel had been cleared from the racing line leaving protruding abrasive stones and loose rocks on the surface. Tänak beat his morning’s run by 6.3 seconds but Neuville closed to within two seconds of the Estonian in the rankings and Ogier pulled a further 6.3 ahead.

A disappointing time for Mikkelsen enabled Ogier to close within one-tenth of a second, as Latvala finished the stage with a tyre off the rim, damaged bodywork and the loss of 50 vital seconds that dropped him to eighth. Lappi was fifth quickest and retained a lead of 12.4 seconds, as Meeke survived a stall and still recorded the best time.

Greensmith punctured again, but Kopecký had his own rear flat tyre in WRC 2 Pro and saw his lead reduced to 2min 01sec. Kajetanowicz, meanwhile, maintained a 39.8-second WRC 2 advantage over Bulacia on a stage where Gaurav Gill was sidelined.

Çetibeli 2 promised to be perilous for the entire field, as distant storm clouds gathered and it began to rain near the start and even heavier at the stage end. Tänak punctured and was over a minute slower than his morning run. He lost 78 seconds to stage winner Neuville.

The Belgian’s stunning time on medium compound rubber was enough for him to close to within 4.8 seconds of Ogier, as Meeke brought his battered car to the finish after running with worn tyres and zero grip and the loss of a minute.

Mikkelsen compared the surface to like ‘driving on ice’ and survived without a flat, as tyre choice became critical on the wet surface towards the end of the stage. Lappi managed to deliver a superb second quickest time to take a lead of 14.9 into the last stage of the day. Ogier, Neuville and Suninen rounded off the top four.

The Ula stage had experienced further rain after the afternoon restart and a heavy storm before the first car reached the start control. The first few kilometres were dry, but puddles were prevalent midday through the special, as Sordo benefitted from medium compound tyres and clocked the fastest time. Neuville closed to within seven-tenths of a second of Ogier, but Lappi held on to take a useful lead into the night halt.

Crews face a further two loops of three stages on Saturday, starting with the 33km of Yeşilbelde from 08.50hrs and the Datça (8.75km – 10.08hrs) special that features a spectacular run around the coast with a stunning view over the sea. A new and much faster and more open Kizlan stage of 13.30km rounds off the loop from 11.06hrs.

The trio are repeated in the afternoon at 13.50hrs, 15.08hrs and 16.06hrs after a return to Asparan for a midday service and regroup.

Aside from a short section at the start, Yeşilbelde runs over the same track as SS8/11 in 2018 and Datça is identical to the timed test used as SS9/12 last year.