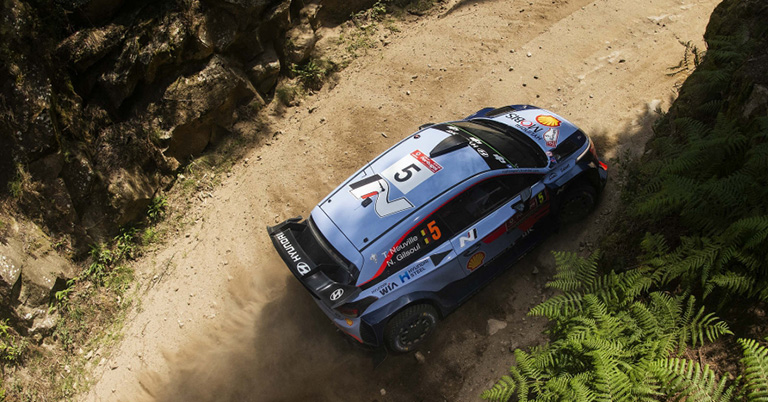 e starts tomorrow’s short finale with a 39.8sec advantage in his Hyundai i20, and victory would propel him back to the head of the FIA World Rally Championship for the first time since February.

Conditions were more benign than yesterday when rock-strewn dirt roads caused carnage among the frontrunners, and the Belgian focused on the double pass through the 37.60km Amarante speed test, the longest of this sixth round of the series.

He protected his Michelin tyres through the two previous stages of the morning and afternoon loops, before attacking in Amarante. He distanced closest rival Elfyn Evans on both occasions to build a comfortable advantage.

“I was comfortable in the car, especially in the long stage. I tried to make a difference in there and it worked twice. It’s not finished yet but it could be a great weekend,” said Neuville, whose conservative mix of hard and soft compound tyres were ideal for the wet final test.

Evans won two of the day’s six stages in his Ford Fiesta, one more than Neuville, and the Welshman looked increasingly secure in second as the day progressed. He struggled for confidence in both passes through Amarante but had a 17.4sec margin over Dani Sordo.

The Spaniard stiffened his i20’s set-up following the morning’s opening test but slipped back into the clutches of Teemu Suninen with a final stage spin. The margin between them narrowed to 4.7sec.

The young Suninen had a stellar day in his Ford Fiesta, holding off fellow Finn Esapekka Lappi in a furious fight. Both were on the limit throughout as they traded seconds in every stage and Lappi ended 11.1sec adrift in his Toyota Yaris.

Mads Østberg was a distant sixth, the Norwegian conceding almost a minute after sliding onto a bank at a muddy corner. The Citroën C3 driver was almost 1min 40sec clear of team-mate Craig Breen.

Breen endured a tough day opening the roads in the sandy conditions but gained a place following more disappointment for Kris Meeke in the French squad’s third C3.

The Ulsterman slid wide on a fast left bend and his C3 rolled heavily down a bank and into trees. Both Meeke and co-driver Paul Nagle were unhurt.

Five more stages covering 51.53km lie in wait on Sunday, including two passes through the classic Fafe test and its famous jump. The second pass forms the Power Stage with bonus points on offer to the fastest five drivers.