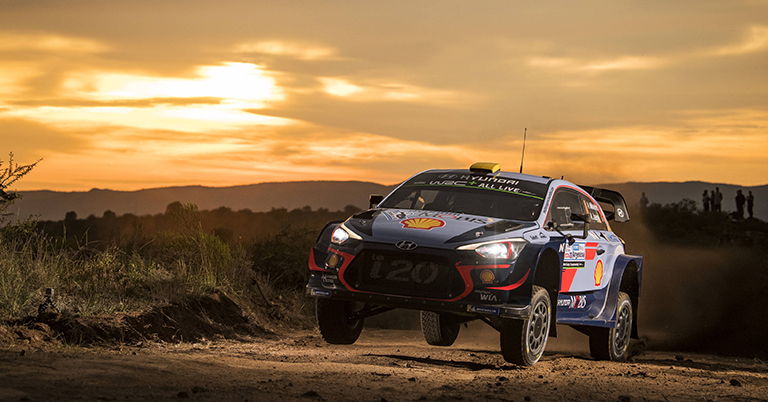 The Norwegian was second through the dust-filled speed test from Las Bajadas to Villa del Dique, before hitting top spot with fifth quickest time in his Hyundai i20 through the stage from Amboy to Yacanto.

“There were so many rocks pulled out in that last stage. I tried to stay away from them but they compromised my line. It’s time to play clever, but have good pace at the same time,” explained the Norwegian.

Despite the disadvantage of running first in the start order and sweeping a clean line through loose gravel, championship leader Sébastien Ogier was just 3.6sec adrift in his Ford Fiesta.

Opening the roads actually worked in his favour in Las Bajadas as the Frenchman was free of the hanging dust which hampered those behind. Organisers extended the gap between the cars from two to three minutes for the rest of today. Ogier won that opening test but was only seventh in the next.

Ott Tänak was third after a topsy-turvy morning. The Estonian lost almost 25sec after an opening stage spin, but flew to fastest time in the next as he charged from ninth in his Yaris to lie only 9.5sec off the lead.

“It was a stupid mistake. From nothing, I hit a rock, had a spin and broke something in the steering which caused problems in the next stage. I struggled to turn left. We managed to make it a bit better but it definitely isn’t fixed,” he explained.

In worse trouble was team-mate Latvala. He was fastest after two-thirds of Amboy, but his Yaris coasted to a halt with broken front right suspension, the relic of an impact with a rock.

Esapekka Lappi hit a couple of stones in his Yaris but escaped to hold fourth, 10.1sec behind Mikkelsen. Kris Meeke’s Citroën C3 and Thierry Neuville’s i20 completed the top six.

Meeke’s dashboard puncture warning flashed up in the opener but it proved a false alarm, while team-mate Craig Breen touched several banks without damage as he struggled with his pace notes.

The Irishman was nevertheless ahead of Elfyn Evans in the standings, who was brutally honest about his morning. “No issues, just not fast enough. We need to try harder,” he said.