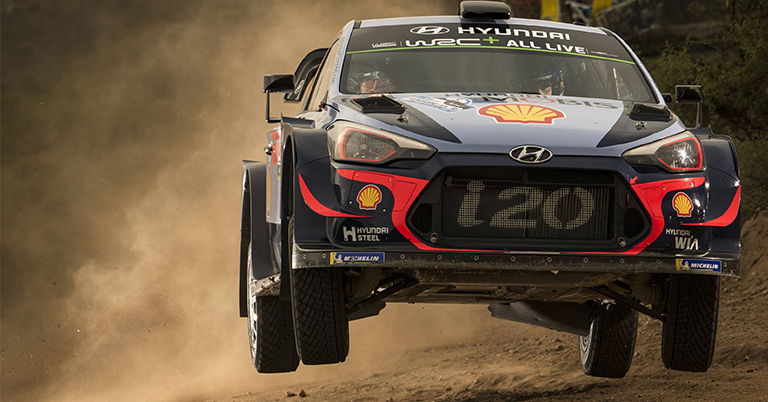 The Hyundai i20 driver edged Ott Tänak’s Toyota Yaris by 0.3sec over the mixed surface roads in the town centre. Championship leader Sébastien Ogier was a further 0.1sec back in third in a Ford Fiesta.

Huge crowds packed the 1.90km stage and Neuville said: “It’s great to start the rally like this. There were a lot of spectators and it was a great atmosphere.”

Estonian Tänak was in confident mood. Asked if his Yaris could be a winner this weekend, he said: “I think so. In shakedown we had a good feeling in the car. We just need a good rest tonight because I know it’s going to be a tough weekend.”

Andreas Mikkelsen was fourth, 0.1sec behind Ogier, despite twice understeering through roundabouts which briefly flipped his i20 onto two wheels. A surprised Kris Meeke and Esapekka Lappi completed the top six.

“I said to Paul (co-driver Nagle) crossing the finish line I thought I would be the slowest. I made a few mistakes, missing my braking at the first corner and messing up a roundabout,” said Citroen C3 driver Meeke.

Craig Breen was 10th in his C3 but the Irishman received a 10sec penalty for checking out late at the time control before the stage.

After tonight’s show stage, the action begins in earnest tomorrow. Drivers journey south for two identical loops of three tough gravel tests around Santa Rosa de Calamuchita, split by a stage on theme park roads outside Villa Carlos Paz. It adds up to 154.20km of competition.