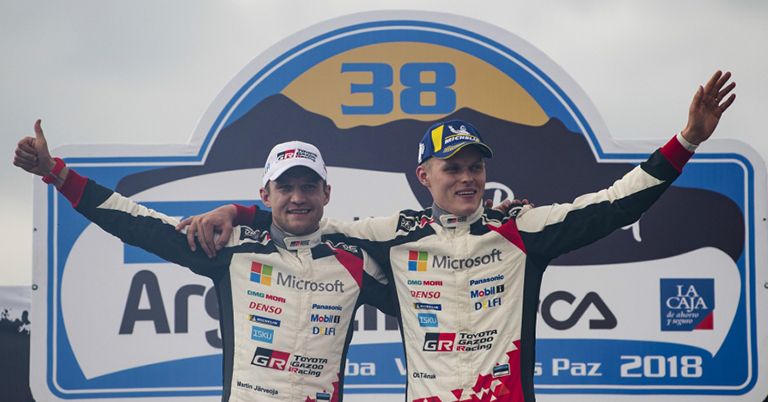 TÄNAK: ‘Podium Was My Dream’

OTT TÄNAK BELIEVED A PODIUM WAS HIS BEST HOPE AS HE LOOKED AHEAD FROM THE LOWEST POINT OF HIS RAGS TO RICHES WEEKEND AT YPF RALLY ARGENTINA.

Hopes of a maiden victory in Toyota Gazoo colours appeared shattered in the first proper speed test on Friday morning when he hit a rock, which threw his Yaris World Rally Car into a half-spin and damaged the steering.

The Estonian plunged to the foot of the leaderboard, almost 25sec adrift off the pace, before staging a remarkable recovery which demoralised the opposition to earn his third WRC win.

“I wasn’t expecting this after the first stage. I was maybe dreaming of the podium as I was already so far away from the lead. But we got some encouragement, started to push hard and obviously everything was working well with the car,” Tänak said.

He threw caution to the wind as he reeled off 10 fastest times from 12 stages on Friday and Saturday to pave the way for victory.

“I was really pushing hard, living on the edge all day Friday basically. On Saturday I was pushing a bit, but not so much any more, and then on Sunday we were obviously more on the safe side. As the lead grew, we were able to control more and more,” he told wrc.com.

The manner of his victory was very different to his previous successes last season with M-Sport’s Ford Fiesta.

“It was nice for me to dominate for the first time in my life. Our last wins in Sardinia and Germany were a bit closer, we had to push until the end. We never had confidence until the last stage but this time it was quite different.

“We made a big improvement in the pre-event test so that gave us confidence. It’s important to have this first victory with the team and it’s great to feel all the support from them,” he added.