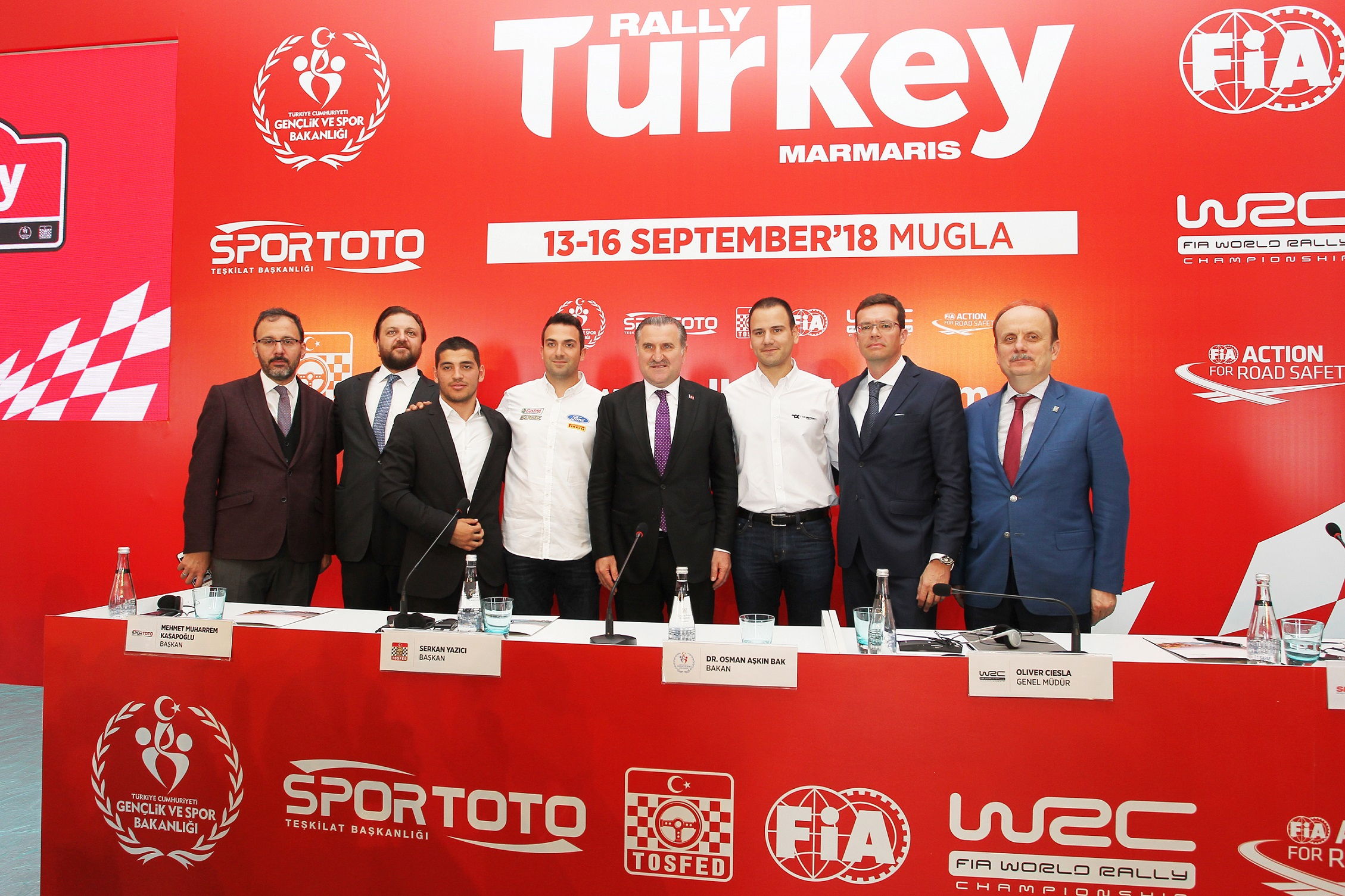 ISTANBUL (TURKEY): Turkey’s Minister of Youth and Sports Osman Aşkin Bak joined WRC Promoter’s Oliver Ciesla and senior officials at the Turkish Automobile Sports Federation (TOSFED) at a press conference in Istanbul on Saturday morning to officially announce Turkey’s round of the FIA World Rally Championship. The 10th round of the series will take place in the Marmaris and Muğla regions of the country on September 13-16.

“We are very glad that WRC is back to Turkey in Marmaris,” said Osman Aşkin Bak, Minister of Youth and Sports of the Republic of Turkey. “Turkey is a centre for the automotive industry and Turkish people love car racing and they will be very happy to see the WRC back here. I am sure that the organisers will put on a successful event. The area where the race will take place is fantastic in terms of tourism and the automotive industry. I say thanks to the FIA and the WRC for placing their trust in Turkey and giving us the opportunity to organise this event in September. It is a great success for our federation and our country and also a success for tourism.

“I am a keen fan of rallying myself. As a child, eight or 10 years old, where I lived there was a rally in the summer called the Bosana Rally, and I used to follow it. I was very enthusiastic to see the drivers when they got out of their cars. They were heroes to me. I used to examine the cars and look at the chassis. I am a mechanical engineer, so I guess this was an early path in my career.”

“We are very much looking forward to the rally now after all the long preparation and hard work, especially with TOSFED and the local authorities,” said Oliver Ciesla, Managing Director of WRC Promoter GmbH.

“We are so curious to see the result. It’s great to have a new itinerary and a new rally on the calendar. It is a change and a new challenge for everyone. Everyone will start with the same conditions and no-one has experience on these roads. It is also a new market for the WRC and we have a chance to introduce the championship to new fans. It is also a very important car market for all the manufacturers involved in the WRC.”

Eren Üçlertopraği, Vice-President of TOSFED, added: “We are proud to host the WRC, which is one of the world’s biggest automobile sports in our country. We are positive that WRC Turkey will be a great experience for all teams, competitors and guests. The Turkish Automobile Sports Federation (TOSFED) is grateful to the State of the Republic of Turkey and especially to the Ministry of Youth and Sports and General Directorate of Spor-Toto for their great support in order for our Federation to conclude the agreement with the WRC Promoter. We would also like to thank the WRC Promoter and our friend Oliver Ciesla for their willingness to make Turkey a part of such an important organisation.

“We strongly believe that this will be a milestone for Turkish automobile sport in terms of regaining its power and it will have a great contribution to our country in terms of tourism and publicity. We are looking forward to welcoming all participants to our home in September and promise that WRC Turkey will be an unforgettable experience.”

Serkan Yazici, President of TOSFED, said: “We are very happy to have Rally Turkey back in the WRC and a big thanks to the FIA and WRC Promoter to have us in the calendar again. I hope all the drivers enjoy the rally and everything around the event will be nice and they will want to come back. It’s going to be a very compact rally, perhaps the most compact in the world at the moment. I hope it works very well. The Power Stage will finish in the Service Park and we will have two city stages.”

The event first joined the prestigious WRC calendar in 2003 and was last held in 2010. Last year’s official candidate event for a WRC return in Marmaris was won by the Turkish duo of Orhan Avcioğlu and Burçín Korkmaz.